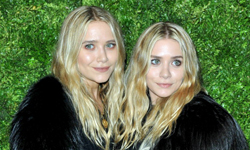 The Olsen twins most definitely made our list. See who else we highlighted.
George Napolitano/FilmMagic/Getty Images

Some families just seem to have an abundance of talent, business smarts and beauty. Whether we're trying to guess who's the oldest sister or who's the most talented (or demands the biggest paycheck -- or is the diva -- or is the hot one), our fascination with celebrity sisterhood is making the sister-sister guessing game a favorite national pastime.

There's something about the glare of the spotlight that can ruin the carefully laid plans of the most expensive publicist, though, and a few of these pairs may be wandering into the territory of America's most irritating. But for now, we're frankly fascinated and wondering what these famous, fab sisters will get up to next. 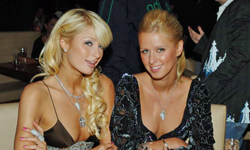 Love them or hate them, it's almost impossible to ignore the Hilton sisters. Born into privilege and blessed with beauty and the kind of media savvy that can turn pop culture on its ear, Paris and Nicky are more than socialites with the substantial cachet of the Hilton name. They have star power. We hate to admit it, but it's kind of easy to dislike these two. Where Paris goes, write-ups and the inevitable sister comparisons follow, so Nicky might be unwillingly caught in the crosshairs, but sometimes Paris makes us think that good taste and common sense may have skipped a generation.

Have you ever felt that a few women get all the great assets while the rest of us are left standing in line with an empty goodie bag? If you didn't already have an inferiority complex, looking at these two bodacious sisters would be enough to give you one. Beyonce Knowles is a Grammy winner and was the wildly popular lead singer for pop sensation Destiny's Child. Her younger sister Solange was a backup performer with Destiny's Child and is a gifted songwriter and singer in her own right. Countless testosterone-rich Web sites expend valuable bandwidth arguing over which sister is the hottest, but there's no doubt that these ladies have beauty, talent and a very dedicated following.

No list of famous and fabulous sisters would be complete without including actresses Lynn and Vanessa Redgrave. These sisters hit the tabloids in a very public competition when both were nominated for supporting actress Oscars in 1966, Lynn for "Georgy Girl" and Vanessa for "Morgan." Both lost out to Elizabeth Taylor, who won for "Who's Afraid of Virginia Woolf?"Unfortunately, Lynn is no longer with us. She died on May 2, 2010, after a long battle with breast cancer. 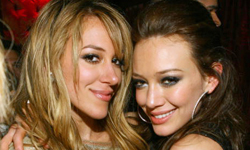 Haylie and Hilary hug it out.
John Shearer/WireImage for Hollywood Records/Getty Images

Singer, actress and songwriter, Haylie Duff is the older sister of popular actress and singer Hilary Duff. Originally from Houston, both sisters managed to land breakout television roles, Haylie as Sandy Jameson in the WB series "7th Heaven" and Hilary on the Disney Channel's "Lizzie McGuire." These two are close. In fact, they're so close that Haylie was the maid of honor at Hilary's Aug. 15, 2010, wedding to Mike Comrie in Montecito, Calif. Now, that's sisterly solidarity worthy of an honorable mention.

The country's "first sisters" are totally adorable. They also seem unspoiled, bright and well-behaved -- in front of the cameras, anyway. For anyone who doesn't already know, Malia Ann is the oldest, born on July 4, 1998, and Natasha, who goes by the nickname Sasha, followed on June 10, 2001. It's probably a toss-up for who's cutest. They'd both make great tween BFFs, but don't try to friend the girls on Facebook. Mom and Dad have nixed their having profiles for the time being.

In 1941, Hollywood was abuzz with speculation about Olivia de Havilland and Joan Fontaine. As sisters go, these two weren't close -- ever.  Like Lynn and Vanessa Redgrave, they found themselves competing for an Oscar, which one of the sisters won -- Joan for "Suspicion." 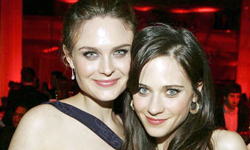 Emily (left) is the older of the two sisters.
Frazer Harrison/Getty Images

Emily and Zooey Deschanel look a lot alike. They have huge, soulful eyes, and both excel at playing eccentric characters that still manage to capture our hearts. Emily co-stars with David Boreanaz in the long-running Fox series "Bones," and Zooey may soon be adding her talents to the Fox evening lineup with a comedy about sexual politics (as yet unnamed) from writer Elizabeth Meriwether. Until her series debuts on the small screen, look for Zooey in "500 Days of Summer," "The Happening," "Failure to Launch" and "Almost Famous." 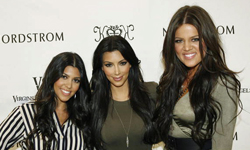 Kourtney, Kim and Khloe make one of many personal appearances.
Donato Sardella/Wireimage.com/Getty Images

Because they practically grew up on the TV series "Full House," it's easy to think of Mary-Kate and Ashley Olsen as members of the family -- who really need a good meal. Titans of industry with clothing and cosmetic lines, the girls have built an impressive retail empire. In 2007, they made the Forbes list of the "Top 20 Richest Women in Entertainment" with a net worth of around $100 million. Although Ashley and Mary-Kate look alike, they aren't all that similar. Ashley is the quiet one, and Mary-Kate is the adventurous one.

Mary-Kate and Ashley Olsen are fraternal, not identical twins, and Ashley is a whole two minutes older than Mary-Kate. 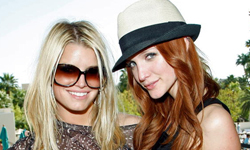 Jessica (left) and Ashlee are pretty different in both their careers and their personal lives.
Ethan Miller/Getty Images for Wet Republic

Jessica Simpson started her entertainment career as a pop singer, but gained notoriety when she starred with her then-husband Nick Lachey in the MTV reality series "Newlyweds: Nick and Jessica." Using reality television as a career jumping-off point is a recurring theme on this list. Jessica managed to immortalize tuna -- and chicken -- in her now infamous remarks about the Chicken of the Sea tuna brand by asking, "Is it chicken or is it tuna?" That and her performance as Daisy Duke in the film "The Dukes of Hazard" established her as the ditzy blond with the sweet smile and lovely voice.

Her little sister Ashlee also opted to go the reality television route to promote her singing career. "The Ashlee Simpson Show" chronicled the career and personal challenges of recording and promoting her debut album "Autobiography."

Since her first role in a commercial for Tide laundry detergent, Dakota Fanning has been going strong. In fact, she's one of the most sought after child actresses in Hollywood, and one who seems to be making a successful transition from adolescent to adult roles. You can see her red-eyed portrayal of the heartless vampire Jane in the fabulously popular Twilight series. Proving that talent is definitely inherited, Dakota's little sister Elle has racked up some impressive credits, too, including "I Am Sam," "Daddy Day Care," The Door in the Floor," "Babel," "Déjà Vu" and "The Curious Case of Benjamin Button."

When she was 8 years old, Dakota Fanning was the youngest actor ever to be nominated for an Actors Guild Award. That was in 2001 for "I Am Sam."

Tennis greats Venus and Serena Williams are a walking testament to the power of sisterhood. They often compete against each another on the court but manage to stay close despite efforts by the media to portray their friendly rivalry as something more. It's a pleasure watching anyone play a sport with the kind of intensity, style and power these two display season after season.

Venus, the oldest sister, is currently ranked third in the world. She is an Olympic gold medalist who turned pro when she was 14. As of this writing, her sister Serena has won a total of 23 career Grand Slams. Watching these ladies play is an inspiration. Is it any wonder that they're No. 1 on our list of fabulous sister acts?

Even though they didn't make our top 10, we wanted to give a warm shout out to Britney and Jamie Lynn Spears. From Britney's beginnings on Disney's, "The New Mickey Mouse Club" to Jamie Lynn's Nickelodeon shows "All That" and "Zoey 101," these sisters are always surprising us.