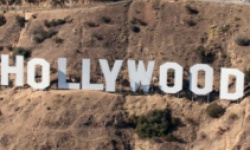 It's hard not to look at a baby bump, and in Hollywood, the paparazzi feed our endless fascination with expectant stars. See pictures of Hollywood baby bumps.
Barry Austin/Photodisc/Thinkstock

Hollywood celebrities are often compared to American royalty, and with good reason. They're beautiful, rich and live a life most of us can only dream about, so it's not surprising that the press is celeb-obsessed, and we get constant media-funneled peeks into stars' lives, loves and, yes, even their pregnancies.

You can often judge a star's celebrity status by the press her pregnancy receives. A short blurb in a gossip rag indicates that a mom-to-be has made a small mark on the Hollywood map, while a front-page tabloid pic is reserved for Tinseltown's hottest leading ladies. In this article, we're going to cover 10 of the most overexposed Hollywood baby bumps in recent memory. We'll tell you which "Star Wars" alum's ballet-conceived babe incited a controversy before he was born and give you the facts about one pop princess' pregnancy woes.

Click over to the next page to find out why the press can't stop speculating about one superstar couple's yet-to-be-conceived seventh child. 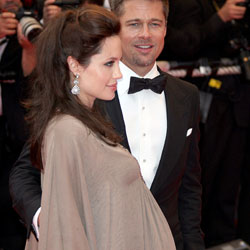 Angelina’s twins accompany Brad and her to the premiere of "The Changeling" as a really big bump.
George Pimentel/WireImage/Getty Images

She's one of Hollywood's hottest leading ladies, but most of the press surrounding Angelina Jolie has nothing to do with her work in film. After Brad Pitt divorced his wife, superstar Jennifer Aniston, he and Jolie wasted no time producing offspring (something Pitt and Aniston never did). But the megastar movie couple wasn't satisfied with just having their own kids, so they adopted some more. Three more, to be exact, which, as of this writing, brings the total number of Pitt-Jolie children up to six (including Cambodian-born Maddox, the first child Jolie adopted, before hooking up with Pitt).

The tabloids are constantly printing rumors and fuzzy (or maybe just a little flabby) belly shots of Jolie in the speculation that she's carrying number seven, but so far she's sticking with her half-dozen babes. We wouldn't be at all surprised if she and Pitt decide to up the number, however, so don't discount the tabloids yet.

If you were to judge her celeb status by the press her baby bump has received, her little one is already stealing the show. It's the second pregnancy for the blonde bombshell, and she and father-to-be and Muse frontman Matthew Bellamy couldn't be happier. Hudson's first pregnancy (with Black Crowes' singer Chris Robinson in 2004) was covered by the press, but, like her star wattage, the media fervor surrounding the actress has increased significantly since then. We can't tell you if her new baby will grow up to be a superstar, but we think it's safe to assume we'll all be reading about the child for the foreseeable future.

Kate Hudson is the daughter of Goldie Hawn and musician Bill Hudson, but she considers her mother's long-time partner, actor Kurt Russell, to be her father, as it is he, not Hudson, who raised her.

She's now established Hollywood royalty, so it's fair to assume the press would cover the actress's pregnancy and the birth of her first child. But when conservative critic Mike Huckabee slammed the star for being pregnant but not married (she's engaged to the baby's dad, "Black Swan" actor Benjamin Millepied), the media frenzy turned into a firestorm. Huckabee supporters agreed with the former presidential candidate and bashed the actress for not saying "I do" before heading into the delivery room, and Portman fans defended her decision to bear the child before slipping on the ring. The press, in the meantime, took full advantage of the controversy and provided as many pics of the pregnant celeb as possible. Not surprisingly, Portman decided to remain "out of the public eye" following the birth of her son in June 2011, ignoring the press and outside opinions to focus on her baby and private life.

Portman became an instant superstar with her role as Queen Amidala in the "Star Wars" prequels, but she made her big-screen debut in 1994 as an assassin's preteen sidekick in "Leon: The Professional."

Jennifer Lopez has it all. She's a singer, actress, "American Idol" judge, and in April 2011, the 41-year-old was named People's most beautiful woman in the world. In fact, she's even gorgeous when she's expecting. Pictures of the pregnant diva could be found in virtually every supermarket aisle in America before she gave birth to her twins, Emme and Max, in February 2008, and the first pictures of her with the newborn babies was front-page news.

Of course, the media is hardly content to sit by and wait for another baby bump to appear before running speculative, pregnancy-related stories. As is the case with many others on this list, the tabloids aren't above printing pictures of Lopez at angles and outfits that show a hint of belly.

Lopez doesn't seem to mind. In fact, she's eager to expand her family. When the topic of pregnancy and babies came up on Ellen DeGeneres' talk show, Lopez said, "As soon as I had the babies, I thought to myself, 'I want to do this a thousand more times!'"

Despite all her recent woes, Britney Spears is undeniably still one of the hottest stars on the planet. Her singles are frequent Billboard hits, and regardless of what kind of personal problems she's dealing with at any given moment, the pop powerhouse knows how to keep people talking (even if it's by shaving her head). Sure, not all her child-rearing decisions have been winners -- driving with unrestrained baby in lap to escape paparazzi comes to mind -- but that doesn't stop the press from snapping pics of her on a daily basis.

The press' penchant for Spears pictures was exaggerated to an almost absurd degree when she was expecting, however. If you were to believe everything the tabloids print, Spears has been carrying her third child for years, as rumors of a surprise pregnancy are announced on a nearly weekly basis. The situation has gotten so ridiculous, in fact, that Spears holds a mock press conference in her video for the song "I Wanna Go," in which she jokingly admits to being pregnant with Brad Pitt's quintuplets.

Britney's Baby Sis Has Child of Her Own

Britney may be a bigger star, but the press still took notice (and lots of pictures) of her little sister, 16-year-old Jamie Lynn Spears, when she became pregnant in 2007. 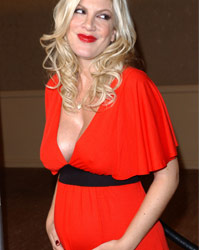 Will Tori Spelling pass on the entertainment genes to her offspring?
Albert E. Ortega/WireImages/Getty Images

As the daughter of late TV mogul Aaron Spelling, Tori Spelling was born with celebrity status all but assured. She's best known for her role as Donna Martin on "Beverly Hills 90210," but she's been acting since childhood and appeared in such shows as "The Love Boat" "Fantasy Island," "T.J. Hooker" and "Saved by the Bell" in the 1980s and early 90s.

Her biggest role, however, is that of a mom, and with three pregnancies so far, the press has had ample opportunity to cover her baby bump in recent years. The media's fascination with the frequently expecting star has only increased during her most recent pregnancy, which she announced in April 2011. The media has printed everything from photos of Spelling taking her kids to a ballet recital to stories detailing how she broke the news about her third child to her husband, Dean McDermott. (She wrapped the positive pregnancy test in a box and gave it to him on Valentine's Day.)

She's funny, attractive and charismatic, but unlike many of the other stars on this list, Tina Fey was not predestined to attract media attention with her pregnancy. Despite being a successful writer and performer on "Saturday Night Live," Fey didn't become a superstar until her late 30s with her primetime sitcom "30 Rock," which debuted in 2006. When Fey announced her second pregnancy in April 2011 on "The Oprah Winfrey Show," the press took notice, and stories about the expecting comedienne could soon be found in the pages of supermarket tabloids and Internet gossip columns. The extra media attention hasn't fazed Fey, who plans to keep working as long as she can. "I'll stay in the writers' room until my mucous plug blows," she said. We can only imagine what the tabloids would print if that were to happen. 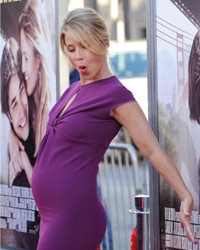 At the premiere of "Going the Distance," Applegate seems to check out whether she now looks almost the same coming and going.
Jon Kopaloff/FilmMagic/Getty Images

Christina Applegate became a teenage sex symbol in the 1980s through her role as Kelly Bundy on the sitcom "Married … With Children," but despite frequent high-profile roles in films and TV, the sultry star hasn't had an easy life. She had a double mastectomy in 2008 when she was 36 years old, so her pregnancy and the birth of her first child were deemed newsworthy by both tabloids and the mainstream media. ABC, CNN and Fox News all featured stories on the pregnant star, allowing Applegate to become a beacon of hope for cancer survivors.

Katie Holmes was something of a star from her time on "Dawson's Creek," but it was her engagement to super-celeb Tom Cruise (who is 16 years her senior) that made her a household name. The world went couch-hopping crazy for pictures of the pregnant Holmes in late 2005 and 2006, and the press was more than happy to oblige with shots of the expecting future Mrs. Cruise whenever possible.

If the age difference wasn't enough to drive public interest, Cruise's mad professions of love on "The Oprah Winfrey Show" -- where he leaped into the air over his new romance -- kept people talking. The couple's place as front-page tabloid fodder was assured when Holmes' pregnancy was announced a few months later, and we've been reading about the duo (and their adorable daughter, Suri) ever since.

Cruise is a long-time supporter and high-level member of the Church of Scientology, a religion founded by the late science-fiction writer L. Ron Hubbard. 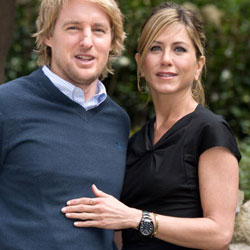 Using Owen Wilson, the on-screen father of her children in "Marley & Me," as a model, Aniston identifies the area in question.
Elisabetta A.Villa/WireImage/Getty Images

Yes, we know that Jennifer Aniston has yet to bear a child, but that hasn't stopped the press from gossiping about it. More speculative stories have been written about the aging starlet's potential offspring than most of the other celebs on this list combined. From her publicly announced baby dreams with former hubby Brad Pitt to the tabloids' frequent front-page speculative belly shots, Aniston's baby drama (or lack thereof) has captivated celeb-watchers for more than a decade.

We'd love to find out when the actress will produce a little superstar, but until she makes an official pregnancy-related announcement, we'll be scanning the supermarket checkout lanes for updates along with everyone else.