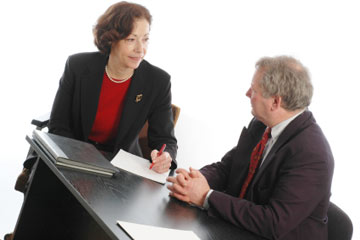 Corporate counsel spend most of the time outside of the courtroom.
©iStockphoto/rjlerich

This is definitely one career that requires a degree (a couple, actually) and a passing score on the state bar exam. For power moms who served as attorneys in the past, however, now is as great a time as ever to dust off the law degree and take the test again.

For legal positions that don't require a presence in the courtroom, corporations are allowing more flexible time than in the past. For example, Christine Bloomquist, a partner at the Washington D.C. law firm Reed Smith and mother of three, telecommutes two days a week and works from 8:30 a.m. to 4:00 p.m.

One reason for the increased responsiveness to allowing telecommuting and flexible hours is certainly due to the ubiquity of inexpensive telecommunications like smartphones and wireless Internet access. But another may be an impending change in the demographics of the legal workforce. More women are entering law school today than earlier in the 21st century. The University of California at Davis School of Law, for example, saw a 2009 entering class that was 55 percent female. Many firms are responding to an increased demand for a work/life balance by allowing more flexible schedules for working mothers.