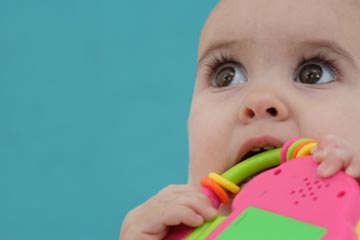 Teething is a natural process babies go through, but it differs a little for each one. See more parenting pictures.
Elie Bernager/Getty Images

Teething, or the eruption of a baby's first teeth through the periodontal membrane, is one of life's earliest growing pains and can be just as taxing for parents as it is for babies. While some babies may bounce through this stage happily unaware, others may experience discomfort and anxiety.

A baby can begin teething as early as 3 months and may continue through the age of 3 years, which is when most kids should have developed all 20 primary teeth. Primary teeth are also referred to as baby teeth or deciduous teeth because they are temporary and will eventually be replaced by permanent teeth.

Children keep their primary teeth until around the age of 6, when their permanent teeth are ready to make their appearance. When this happens, primary teeth become loose and are expelled, or exfoliated, from the gums. The process of developing permanent teeth is much longer than that of primary teeth and can last well into adulthood, concluding with the appearance of wisdom teeth, or third molars. This set of molars typically appears between the ages of 17 and 21 and can be troublesome because they often come in misaligned and displace other teeth. This is why it is common for wisdom teeth to require extraction.

But this process actually begins in utero, when teeth begin the first of three stages of development. The next page examines these stages and explores the biology and mechanics of teething.

Biology and Mechanics of Teething

The first stage, growth, begins as early as the seventh week of fetal development when tooth buds start forming. These tooth buds are masses of cells containing the tissue that eventually forms the teeth.

During calcification, the second stage of tooth development, calcium and mineral deposits harden the tooth in layers, forming the enamel. This is an effective process since tooth enamel is the hardest material in the human body, but this toughness comes at a price. Because there is no living tissue in enamel, it cannot repair itself the way other parts of the body can.

Babies are actually born with all 20 primary teeth, but they are embedded in the gums. The fun really begins during the third and final stage, eruption, when these teeth begin working their way to the surface. This is sometimes painful because the tooth is twisting and maneuvering its way through the gums to take its place in the mouth. For as long as it takes for the tooth to emerge, the discomfort can persist. And because communicating this sensation is still years beyond a baby's ability, his frustration and anxiety can compound the situation.

Heredity also plays a role in tooth development. A parent and child may have similar teething patterns, so understanding your own teething history may help when your own children are going through it. Additional factors that influence how disruptive teething may be for a particular child include gum density and pain tolerance.

Hygiene is critical during teething because irritated or swollen gums are susceptible to infection. For this reason, it's a good idea to keep the area around the mouth as clean and dry as reasonably possible and periodically wash the gums with a soft, wet cloth. And because teething babies often are not very discriminating about what they put in their mouths, you should be sure to sanitize all teething rings and other chew toys.

Even though primary teeth are eventually lost, taking care of them is important for long-term dental health. It's not uncommon for babies to get cavities and other oral problems. Also, prematurely losing primary teeth can force the remaining teeth to crowd together in an effort to close gaps, causing permanent teeth to come in crooked or out of place.

In the next section we'll discuss some of the symptoms commonly associated with teething, and some that are less common but more severe.

Timeline of When Primary Teeth Appear

The process of teeth cutting through the gums can often lead to sensitive and swollen gums, increasing a child's irritability. This is why teething is a popular scapegoat anytime a baby is cranky, whether or not they are actually cutting teeth or not. To determine whether teething is the culprit, you can run a finger along the gums and try to feel whether any teeth may be on their way.

Another common symptom is excessive drooling, which also makes this one of the most obvious hallmarks of teething. Teething stimulates the desire to chew, which in turn activates the salivary glands [source: Cohen]. Drooling by itself may seem like a small distraction, but it can lead to other issues. Excessive moisture can cause the skin to become irritated and lead to rash and inflammation, and excessive drainage can lead to a cough.

The urge to chew can also mean biting, another common symptom parents should be on the lookout for. As the teeth make their way to the surface, the gums may become sore. The counter pressure biting provides offers relief from the soreness, and anything a baby can get his hands on is likely to wind up in his mouth.

These symptoms can lead to slightly more serious teething side effects, including loss of appetite, sleeplessness and bruising of the gums.

A sensitive mouth may prohibit babies from eating food, especially solids. Liquids should offer a way around this and mitigate any risk of malnutrition, but it's probably a good idea to monitor food intake during this period. Sleeplessness can also be the result of teething if babies are too uncomfortable to soothe themselves. And finally, teething can sometimes cause bruising or bleeding of the gums. While to parents this may look alarming, it's likely not terribly painful for the child. If this happens, it's easy enough to swab the area and make sure the blood is coming from the gums.

It's important to keep in mind that each of these symptoms may also be caused by illness, so whenever in doubt, parents should consult a physician. Now that you understand some of the symptoms of teething, let's explore some remedies you can use to alleviate the discomfort.

Symptoms Not Caused by Teething

These symptoms are commonly -- but mistakenly -- attributed to teething:

The stress that comes with teething can affect kids and parents alike, and understanding a few simple soothing techniques could make a big difference for everyone during this transition. Most teething infants don't experience more discomfort than can be eased by a mother's touch. Something as simple as holding and rocking can usually put everyone at ease.

Because the desire to chew is so great during teething, a parent can press her finger against the gums and provide the desired counter pressure and alleviate the pain. Another popular way to occupy gnawing mouths is by using a teething ring, a toy designed specifically for teething babies. Teething rings come in all shapes and sizes and are usually made of sturdy rubber that can withstand the abuse of an aggravated toddler.

One common variation is teething rings that are filled with water and can be refrigerated. Just like applying ice to any wound, a chilled teething ring offers additional comfort for sore gums. Ice cubes are also a popular remedy among parents, but represent a significant choking hazard. One way to mitigate the risk of using an ice cube is by sealing it in a plastic bag then wrapping the bag in a washcloth. The baby can suck on the washcloth without the risk of swallowing the ice cube, but you'll still need to keep an eye out in case the bag comes loose from the washcloth. Along these lines, cold food such as applesauce or yogurt can also help alleviate some of the discomfort.

For persistent pain, there are also over-the-counter teething medications available. Teething gels are topical anesthetics that are applied directly to the gums and work on contact. While they can be effective, it's important to use these sparingly. Because the symptoms associated with teething could also represent any number of other conditions, teething gels can be overused and for this reason some pediatricians are hesitant to recommend them at all. Infant ibuprofen, because it's an anti-inflammatory, can also be used to alleviate some of the pain of swollen and irritated gums [source: Greene]. Always check with your pediatrician before administering any medications.

For an alternative solution, clove oil is a natural anesthetic that some dentists have used to treat toothaches for years. Clove oil should not be given to infants under 6 months old, and it needs to be diluted for babies and toddlers [sources: Medline Plus, Pitman]. The combination of the eugenol in the clove oil and the massaging of the gums can be very soothing for a teething baby. Some also recommend pure vanilla extract, which naturally has a calming effect and may create a comforting, warming sensation [source: Nature Moms].

Learn even more about teething and how to deal with it by visiting the links on the next page.

Occasionally, babies are born with one or two teeth already visible. Known as natal teeth, these are rare and occur just once in every 2,000 to 3,000 births [source: University of Maryland]. While typically isolated anomalies, natal teeth can also be associated with certain conditions such as Pierre Robin syndrome, a condition marked by a small lower jaw. Natal teeth have very little root structure and, as a result, are usually loose. To eliminate the choking hazard, they are often extracted right away. Because natal teeth are primary teeth that have erupted prematurely, they will not be replaced until the permanent teeth are ready to come in. The resulting space may be problematic for future tooth development.