by Discovery Fit and Health Writers 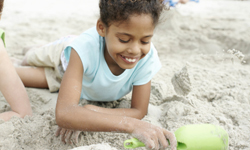 In some cases, kids with cerebral palsy have stiff muscles; sometimes, they're able to move their muscles, but in an odd manner that makes it difficult to stay balanced.
TLC

What is cerebral palsy?

Cerebral palsy is the term used to describe conditions that affect the control of movement and posture. It is caused by damage to the part of the brain that controls muscle movement. Symptoms range from mild to severe, but the condition tends not to worsen as the child gets older. Physical therapies and other treatments can significantly improve the condition. Many children with cerebral palsy also have other medical conditions, such as metal retardation, learning disabilities, or problems with vision, hearing, or speech.

How common is cerebral palsy?

Cerebral palsy is generally not diagnosed until the child has reached age 2 or 3. Approximately two children out of 1, 000 over the age of 3 have cerebral palsy. Currently in the United States, about 500,000 individuals — both children and adults — are diagnosed with cerebral palsy. Scientists do not know exactly what causes cerebral palsy, but recent research has shed some light on the topic. In about 70 percent of all cases, the damage to the brain takes place before birth. In a small number of cases, cerebral palsy is caused during delivery or in the first months of life. Rh disease, as well as certain infections during pregnancy, such as rubella and toxoplasmosis, are known to increase the risk of brain damage to the fetus. Brain damage can also occur when the placenta is not functioning properly. Premature babies who weigh less than 3 1/3 pounds are up to 30 times more likely to develop cerebral palsy than full-term babies. Doctors used to believe that a lack of oxygen during difficult deliveries was a primary cause of cerebral palsy, but recent studies suggest that only about 10 percent of cases fall into this category.

How is the child affected by cerebral palsy?

Parents may become concerned when a child has trouble reaching physical milestones. A child with cerebral palsy may have trouble rolling over, sitting, walking, and crawling. Some children have low muscle tone and appear floppy; others have increased muscle tone, which makes them appear stiff. There are three major types of cerebral palsy. About 70 percent of CP cases are categorized as spastic cerebral palsy, in which muscles are stiff, making movements and walking difficult. Dyskinetic cerebral palsy affects 10 to 20 percent of CP patients. It is characterized by fluctuations in muscle tone. Children with this form of CP may have trouble sitting or swallowing. Ataxic cerebral palsy is the least common form; it affects balance and coordination. A person with this type of CP may walk with an unsteady gait and have difficulty with fine motor tasks.

What are the treatments for cerebral palsy?

While there is no cure for cerebral palsy, with treatment and physical therapy most children can significantly improve over time. Physical therapy often begins soon after diagnosis, helping a child improve motor skills such as sitting and walking. There are drug therapies and surgical procedures for some types of CP. Many children work with a speech therapist to improve their communication skills, and with an occupational therapist to manage the skills of daily living.