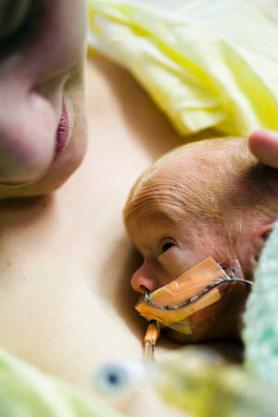 This baby made a surprise appearance before 37 weeks were up. See more baby care pictures.
DCL

When a woman gets pregnant, she expects to spend about nine months renting out her womb. But some babies don't stay quite that long -- the ones who leave after less than 37 weeks are premature. Thanks to advances in reproductive technology, preemies are on the rise. Women who have been through assisted reproduction frequently have twins or triplets, and multiples often check out of the womb before they've reached the end of their lease.

Luckily, neonatal care has improved along with reproductive technology, which means many premature infants have a good chance at a perfectly normal life. Still, it may not be easy, and the more premature the baby, the likelier it is that he or she will experience some health problems in the first few days of life. On the next few pages, we'll unravel the common acronyms and conditions you may hear around the neonatal intensive care unit (NICU).

Babies who are born prematurely don't get the chance to finish all the growth processes that go into being a human. One such process occurs in the eyes. While in the womb, blood vessels grow until they reach the edge of the retina, but when a baby is born too early, the vessels haven't had time to reach their final destination. After the baby's born, those retinal edges send out distress signals to the rest of the eye, calling for nourishment. That causes the blood vessels to grow, but instead of growing normally, they grow every which way, a condition known as retinopathy of prematurity (ROP).

In some cases, this isn't a big deal, but in more severe cases, the blood vessels could cause leaking or bleeding in the eye. In the severest cases, they could cause the retina to detach from the back of the eye, resulting in blindness. The condition is only detectable through an eye exam, so you'll find lots of ophthalmologists roaming the halls of the NICU. The eye doctor will keep a watchful eye on the vessel growth to figure out if the baby will need laser surgery or cryotherapy to prevent long-term problems. 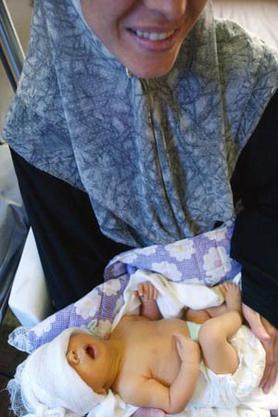 A mother holds her newborn baby during treatment for jaundice at a hospital in Baghdad. The baby's eyes are covered to prevent damage from UV rays.
DCL

Bilirubin is a yellow waste product resulting from the normal breakdown of red blood cells. The liver removes bilirubin from the bloodstream and sends it to the intestinal tract, where it makes its grand exit out of the body and into a diaper. Preemies, however, face two major problems when it comes to disposing of bilirubin: Their livers can't handle the bilirubin fast enough, and they may eat less, meaning they have fewer bowel movements. That means even the bilirubin that was filtered from the blood may not have anywhere to go.

Too much bilirubin, also known as hyperbilirubinemia, results in jaundice, which yellows the baby's skin and whites of the eyes. Signs of jaundice will probably begin appearing between the second and fourth day of life, and they can last for a few weeks in preemies. In rare cases, extremely high levels of bilirubin can lead to brain damage. Usually, however, doctors can treat the condition with light therapy. The baby will spend some time under special lights wearing just a diaper and some protective eyewear. Doctors will monitor a baby's bilirubin counts until they reach healthy levels. 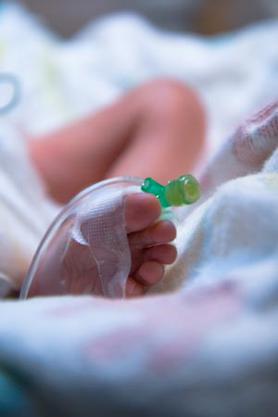 A baby with PDA needs a little extra care.
DCL

Once babies are born, they're expected to breathe on their own, a task their mothers handled for them in the womb. That transition from womb support to independent breath involves a short blood vessel known as the ductus arteriosus. Before the baby is born, the ductus arteriosus connects the aorta and the pulmonary artery, serving as a lung bypass. Shortly after birth, the ductus arteriosus closes, and the major arteries start delivering blood to the lungs to pick up oxygen.

In premature babies, however, the ductus arteriosus often remains patent, or open, resulting in abnormal blood flow. The disrupted blood flow strains the heart and the lungs, and left unchecked, it could lead to heart failure. A baby with PDA might have a hard time breathing and eating. You may also notice the baby sweating while eating and getting tired easily. The diagnosis can be confirmed if the doctor hears a heart murmur. In some cases, doctors will advise watchful waiting, since the ductus arteriosus can close on its own. Other times, medications or corrective surgery may be required. 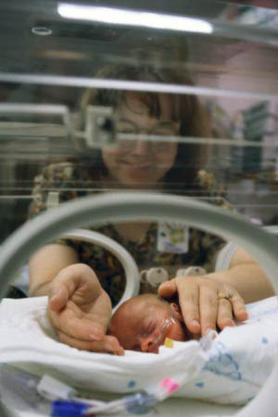 Sometimes the tiny ones forget to breathe.
DCL

It's not uncommon for sleeping babies to go for a few seconds without breathing, but the condition can be much more severe in premature infants. That's because the area of the brain that controls breath isn't fully mature. When a baby stops breathing for 15 to 20 seconds at a time, he or she is usually diagnosed with apnea of prematurity (AOP).

During an instance of apnea, the baby's heart rate will decrease and the skin will turn pale or blue. Newborn preemies are usually hooked up to a monitor that will alert caregivers if the baby stops breathing for a certain number of seconds. You can usually get the baby to breathe again simply by rubbing his or her back, arms or legs, but some preemies may require time on a ventilator or medications. AOP usually goes away on its own, and doctors don't think it causes any long-term brain damage. 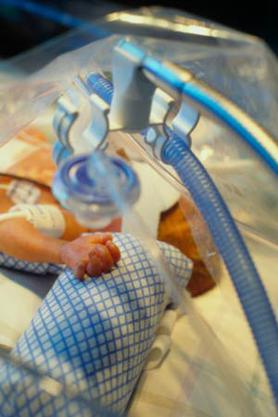 Lots of tubes and wires just mean the baby's getting plenty of medical attention.
DCL

Many premature babies have breathing problems, and respiratory distress syndrome (RDS) is often the culprit. RDS is caused by a lack of surfactant, a liquid substance that coats the lungs and allows them to expand adequately. When carried to term, babies are usually born with plenty of surfactant, but preemies may not have enough to get their lungs going.

Signs that babies are suffering from RDS include grunting noises, flaring nostrils, erratic chest movements, and rapid, shallow breathing in the first few hours after birth. To treat the condition, doctors can give the baby artificial surfactant until he or she can make enough on his or her own. The artificial surfactant is often combined with ventilator support. If the breathing problems continue past the infant's original due date, when the lungs should be more developed, then the baby may be diagnosed with a condition called bronchopulmonary dysplasia (BPD).

Premature babies may not have the easiest start in life, and they'll need lots of special loving care. By learning the basics about these potential health issues, you're on the right path to helping the preemie in your life.