by Danielle Fisher
Prev NEXT
4 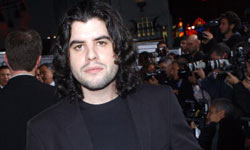 OK. So Sage may not be such a bad name. But we're still trying to make sense of why Sly Stallone would give his first born a middle name like Moonblood.
E. Charbonneau/Getty Images

If you're Rocky's son, the bullies must stay away from you on the playground, right? We hope that's what Sylvester Stallone and his first wife were thinking when they named their two sons, Sage Moonblood and Seargeoh.

Sage isn't such a bad choice. It is, after all, a spice. And spices have long been used as baby names. Just look at classic names like Rosemary and Ginger. But, Moonblood? It sounds like something out of the "Twilight" series. Was Stallone just looking for an excuse to teach is son his well-known boxing skills? The younger son, Seargeoh made out a little better with a modern spelling of Sergio. Although the spelling is bewildering, at least it sounds like a typical Italian name.