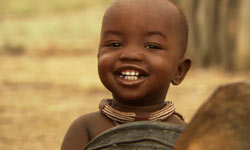 Ponijao lives in Namibia and stars in the documentary, Babies.
Focus Features

Forget that old Hollywood saying about never working with kids or animals. Babies have been the stars of some memorable movies over the years. Whether comedic, dramatic or horrifying (a disturbing number of baby movies are about children of the devil), the cinematic adventures of adorable newborns can provide hours of entertainment -- even though none of the babies in the films are nearly as cute as your own, of course. Here are 10 of our favorites.

A department store clerk (played by Ginger Rogers) takes in a baby she finds on her doorstep and causes a scandal when she's mistaken for the baby's biological mother. Her boss's son (David Niven) disapproves of her single-gal lifestyle, and tries to get her to behave more appropriately for a young mother, with both comic and romantic results. If you can't get enough of this story, you can revisit it with the 1956 remake, a musical called Bundle of Joy with Debbie Reynolds and Eddie Fisher in the lead roles. 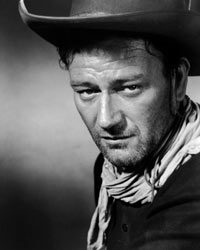 John Wayne and a baby? That's right, and they make a pretty good combination in this fairytale Western. Wayne stars as Robert Hightower, one of three outlaws who discover a woman about to have a baby in a covered wagon (and you thought going into labor in a hospital was challenging). She dies giving birth and the outlaws promise to care for the child. They find the baby clothes and food, read the baby books and ultimately keep their promise of caring for the newborn. But they're also trying to escape from the law. When he's finally caught, Hightower is offered a suspended sentence if he'll give up the child -- he refuses. 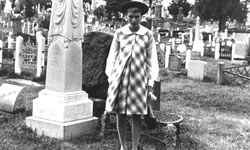 Rosemary, played brilliantly by Mia Farrow, slowly realizes there's something not quite right about her obstetrician, Dr. Abraham Saperstein, and something really wrong with her unborn child. Her husband is acting suspicious, too. And what's in that nasty drink she's forced to imbibe every day? Featuring extremely creepy neighbors and perhaps cinema's most suspenseful dramatization of consulting a doctor for a second opinion, this '60s horror classic is mostly about what you don't see -- though when the baby finally arrives, he clearly resembles his father.

One of the Coen brothers' more comedic films, this one still includes a jailbreak, a robbery (in which a large package of diapers is the loot) and a kidnapping. Holly Hunter stars as Edwina, an ex-cop who can't have children and decides to steal a baby from a wealthy couple with quintuplets. Her ex-con husband H.I. (Nicolas Cage) goes along with the plan, but his prison buddies, the couple's friends and a "warthog" on a motorcycle make family life increasingly bizarre and complicated.

"I can't have a baby, I have a 12 o'clock lunch meeting," wails Diane Keaton in this comedy-drama about balancing work and family. Keaton plays J.C., a workaholic New York businesswoman who "inherits" a baby from her long-lost relatives. Initially a disaster (albeit one that creates opportunities to skewer the yuppie lifestyle), becoming a mother ultimately solves all of her problems, leading her to abandon her 1980s power suits for a better house, better job and better boyfriend (Sam Shepard as a handsome veterinarian). Just like in real life, yes?

Clearly, babies were on Hollywood's mind in 1987. In this movie, three roommates (Tom Selleck, Ted Danson and Steve Guttenberg) are enjoying life in their swinging bachelor pad. Then they find a baby -- wait for it -- on their doorstep. One of the roommates is the little girl's dad, though he hadn't known about her until her surprise appearance. Alternately sweet, funny and cheesy, the movie features the obligatory adorable baby, an unnecessary subplot about drug dealers and a classic diaper-changing scene in which Selleck's character offers Guttenberg's $1,000 to take over the job. Perhaps surprisingly, this feel-good comedy is directed by Leonard Nimoy of Star Trek fame.

Single mom Mollie (Kirstie Alley) is looking for love, and overlooking Mr. Right, a kindly cab driver named James, played by John Travolta. If only she could hear what her infant son, Mikey, is thinking about her choice of men -- though she'd probably be disturbed to know that he's thinking in the voice of Bruce Willis, and he's full of snarky comments and wise-beyond-his-months insights. This movie spawned a couple of sequels, so if one sarcastic baby isn't enough for you, check out Look Who's Talking Too, in which Roseanne Barr provides the voice of Mikey's new sister, Julie, and sibling rivalry flares. 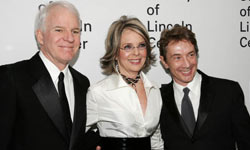 Written and directed by husband-and-wife team Charles Shyer and Nancy Meyers, who brought you Baby Boom, this film also stars Diane Keaton in a maternal role as Nina Banks. Steve Martin is at the center of the story as her husband, George, a grandfather-to-be who learns he's also a father-to-be again. Martin Short plays a wacky interior designer, Frank, while Kimberly Williams is Keaton and Martin's pregnant daughter, Anne. And of course the dual-pregnancy storyline leads to mother and daughter giving birth at the same time. Everything turns out well, but not before Martin's character has a few hilarious freak-outs about becoming the parent of a newborn again so late in life. 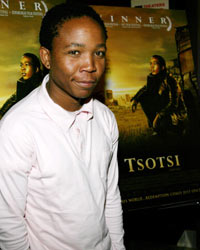 An Oscar winner for Best Foreign Film, Tsotsi (played by Presley Chweneyagae) depicts six days in the life of a young South African gangster. Tsotsi shoots a woman to steal her car, but then realizes there's a baby in the back seat. He decides to keep the baby and while he feeds it, cares for it and carries it around, he grows attached. He also forces Miriam, a nursing mother, to feed the baby. Tsotsi doesn't become a hero, but he is emotionally affected by caring for the child. His nickname Tsotsi means thug, but his real name is revealed as the plot unfolds and he distances himself from his criminal lifestyle. 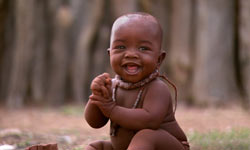 Ponijao lives in Namibia, and costars with Mari, Hatti and Bayar -- from Tokyo, San Francisco and Mongolia respectively -- in 2010's Babies.
Focus Features

This French documentary from director Thomas Balmès tells the story of four babies from different regions of the world. All of the kids are cute, of course, and you can enjoy watching them just be babies, while at the same time comparing and contrasting the lives of Mari and Hattie, born in the wealthier locales of Tokyo and San Francisco, and their co-stars Ponijao and Bayar, who hail from Namibia and Mongolia. The movie is a great chance to spend some time with babies without having to clean up after them, as well explore how children grow up in different cultures.