by Emilie Sennebogen
Prev NEXT
8 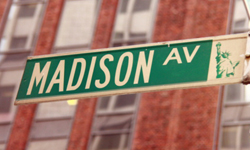 It's not just the name of a fashion-forward street anymore.
Hemera/Thinkstock

It's the name of the capital of Wisconsin, a famous avenue in New York City, and the eighth most popular girl's name in the United States. If you guessed Madison, then you get the prize -- or you saw the title of the page. The name Madison was barely even used for a girl's name until 1985, existing almost exclusively as a surname in the late 1800s, and disappearing as a first name almost altogether for 60 years or so. The exception was naming boys Madison in the late 1800s through roughly the 1950s. Some trace the rise in making it a girl's name to the movie 1984 movie "Splash," in which actress Daryl Hannah played a mermaid who named herself for the New York avenue.