by Kim Williamson
Prev NEXT
1 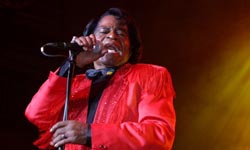 The one and only James Brown performing at the 50th Anniversary of Rock 'n' Roll in New York.
Shareif Ziyadat/FilmMagic/Getty Images

Here's the big reveal: If you haven't already guessed, the most popular names of the last century are James and Mary.

It's fitting, even karmic, that James means "supplanter" or someone who replaces another, because this name replaced every other boy name to gain the top spot. Six U.S. presidents, at least two Declaration of Independence signers, plus numerous saints and kings have had this name. Modern-day Jameses include actors Cagney, Dean, and Earl Jones; athletes Jim Thorpe and Jimmy Connors; musicians James Brown, James Taylor and Jimi Hendrix -- and this barely touches the tip of the iceberg.

Mary is by far the most popular girl's name of all time. The Bible alone mentions four Marys in the New Testament, including Jesus' mother. In the Christian Church's early days, the name was considered too sacred to bestow on a person but around the 12th century, people began using it again. There have been famous Marys in every walk of life -- history, religion, science, literature, politics, royalty -- even on ships and in nursery rhymes.