10 Medicines Not to Give Your Baby

by Sara Elliott
Prev NEXT
10 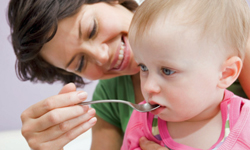 Know all of the ingredients before giving the medicine.
BananaStock/Thinkstock

Codeine is an example of a drug you wouldn't consciously give an infant without the express approval of your pediatrician, but it could transfer to your child while breastfeeding. There's always the chance that what you ingest will get into your breast milk, so make sure any medications you take will either stay out of your milk or be safe for your baby.

Codeine can be an ingredient in prescription as well as non-prescription medications. It's a narcotic pain reliever sometimes prescribed to nursing mothers. The liver metabolizes codeine into morphine, and some women can have high levels of this metabolized morphine in their breast milk after taking codeine medications. Women who metabolize codeine quickly (ultra-rapid metabolizers) may transfer dangerous amounts to their nursing babies. Although codeine has been given to nursing mothers for years and is still prescribed in some circumstances, the FDA has had concerns about it since 2007, citing warning signs to look for in babies who may be ingesting unsafe levels of morphine in breast milk. They include:

If you notice these symptoms, contact your baby's doctor or obtain emergency assistance immediately.