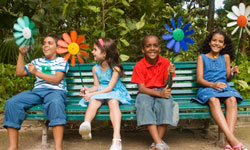 Adoption gives children an opportunity for a new beginning in a supportive and loving environment.
Caterina Bernardi/Getty Images

When Daniel was born, his adoptive parents, Gary and Ellen Middleton, were overjoyed. "Things went well during the birth mother's pregnancy and her delivery was normal," says Gary. (Names have been changed to protect families' privacy.)

But just a day after Daniel was delivered, his pediatrician recommended a consultation with a urologist. One of Daniel's ears had an ear tag, a small piece of skin that looks like a wart. "We learned that the ears and kidneys develop at the same time in the uterus," Ellen says. "So, an abnormal growth on the ear can mean there's a problem with the kidneys."

The ultrasound test proved the accuracy of the pediatrician's prediction: Daniel's left kidney was enlarged and not functioning normally. "The doctor told us Daniel's condition was not serious, but should be watched. And he told us not to hesitate to complete the adoption because of health issues," Ellen says. Ellen took Daniel to see specialists at Children's Hospital in Chicago, where they recommended surgery immediately. Afterwards, doctors reported a 100% improvement in Daniel's kidney function. Today, Daniel is a healthy toddler. "No more tests are needed," says Gary. "He's doing fine."

All parents worry about possible health problems when they have a child, regardless of whether the child is adopted or not. "We chose to avoid some avenues of adoption because of problems we'd heard of," Gary explains. "But we recognized that even people who have great prenatal care could have a baby with health issues too."

For the most part, people interested in adopting a child can expect to adopt a child with minor or manageable health considerations. A healthy adoption is one where the child is placed where he or she will thrive, no matter what the medical considerations may be. Most children have some kind of health issue requiring attention. For adopted kids, those health considerations may be somewhat unique, and sometimes, unexpected. The best approach for a healthy adoption is to be informed and prepared.

Adoptions are done either domestically — meaning the child is born in your own country — or internationally. In either case, it sometimes is easier to predict or know whether the child will have specific kinds of health problems, depending on information available about the child and/or the birth family.

Important Questions to Ask When Adopting

Regardless of whether you adopt internationally or domestically, you should have an opportunity to get information about your child's birth family. Here are questions to ask:

Be Proactive When Adopting

Gay Bonheur adopted 4-year old Marina from Russia six years ago expecting to encounter a few health issues. But she was surprised when Marina tested positive for hepatitis C, a potentially serious liver condition. "We had never heard of it and our general practitioner didn't know about it either," Gay says. As Marina got older, she also developed various other health problems common to children of her age adopted from Eastern Europe.

"It all was more than I realized I would get. When we first considered her for adoption, I didn't even know enough to question about her medical records," Gay says. "Looking back, I wish I'd been prepared. These days adoptive families are able to consult international adoption specialists prior to adoption. They can help you make an informed decision."

To better educate herself — and the health professionals treating her daughter — Gay spent a lot of time gathering information. "I know more than my doctor. Our pediatrician did his best, but he was asking me questions! You have to be an advocate and learn for yourself."

"The major thing that helped me cope with Marina's health problems is that I considered all possible conditions that might surface and had her tested for them. For instance, I didn't automatically assume her eyes or ears were okay. I went ahead and had her checked. By being proactive rather than reactive we were much better able to manage her total health. In fact, Marina has done so well that one doctor who looked at her said, 'This child doesn't match this medical record!'"

In most cases, health problems that occur in adopted children are either minor or manageable. "The vast majority of kids (adopted internationally) do adapt and do well long-term," says Jane Aronson, MD., who specializes in treating internationally adopted children. Even children considered at risk for specific problems have a remarkable capacity to make good recoveries and thrive as they grow up.

"The medical system in Russia is called "Defectology." Doctors there believe children are defective adults," says Dr. Aronson. "They say that over time the child recovers with medications and physical therapy and then the strange diagnoses (which adoptive parents often see in medical reports) disappear.

So, many of the diagnoses adoptive parents see do not reflect the specific child, but are simply used on all kids in Russia, not just orphans. The child may have abnormalities, but the diagnosis is not reflective of the true aspects of that child's health. The best thing to do is to look at is whether the child's head circumference is age-appropriate along with pictures and videotapes of the child."

By gathering as much information about the child's current health status and the background of the birth family, you are better able to decide whether or not to adopt that child. "Children adopted internationally often look healthy," says Dr. Schwarzwald. "So pediatricians not used to seeing such kids may overlook their what's going on with them medically." Medical conditions more commonly found in children adopted internationally include:

"If you're adopting an infant, look for things such as whether the baby's weight and head circumference are age-appropriate," says Heidi Schwarzwald, MD., Director of the Texas Children's Health Center for International Adoption (www.texaschildrenshospital.org).

"Find out what developmental milestones the child has achieved. For toddlers, you also want to watch how they walk and run. Make sure the child can bend over, pick things up and stand back up. Look at how they feed themselves.

Most importantly, find out how the child interacts with caregivers. People adopting school-aged children will want to know whether they can do the 'basic things' for a child of that age, how well the child speaks his or her native language, You'll want to pay particular attention to how they are forming emotional attachments - and many of these kids do great!"

Consult a Pediatrician Before Adoption

Adoptive parents should select a pediatrician before adopting a child and meet with the doctor to discuss the child before the child comes home. Once you gather as much information as possible about a child, plan to meet with a pediatrician to talk about what it all means and whether there are any specific concerns.

If you are adopting a child from another country, check out one of the international adoption clinics located throughout the US. They provide many services for families, including preadoptive evaluation before your accept a referral. If the child you are considering has a known health condition, you may want to consult a specialist in that field.

Prospective adoptive parents should request a videotape of the child and share it with a health professional capable of evaluating it. Make sure the video is dated so it can be correlated with the child's current age. A good video is at least 5 minutes long and shows these things:

You're On Your Way to Adopting

You're on your way to an adoption … or maybe your child is already home. Here are some things you can do to help make your adoption a healthy one!