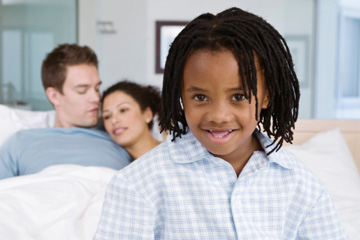 Parents can help adopted children establish a sense of identity by exposing them to their racial heritage.
TLC

Every child needs a sense of background and identity.

Many of us have painful memories of our first day of school. We recall the tears we shed watching Mommy wave good-bye or hearing the taunts of classmates ridiculing us about a pair of thick glasses or a funny haircut. But, for me, the first day of kindergarten was the day I realized I was not white.

When I was a few days old, my Asian birth mother abandoned me on the steps of a government building in Seoul, South Korea. Like thousands of other Korean children, I was adopted by an American family and brought to the United States before I was 6 months old. I spent most of my childhood in California, then moved, at age 11, to a small town in Indiana.

My parents felt the best way to help me and my adopted brother, who is also Korean, assimilate into American culture was for them to not dwell on our foreignness.

They weren't trying to pretend we weren't adopted; they just never discussed our identities as Asians. To them, I was their daughter - the child of an Italian engineer and his German-American wife. Korea was simply the place where I was born, and my parents naively believed that being an Asian in America wasn't any different than coming from another faraway place like Oslo or Vienna.

Even though prejudice didn't exist in our home, it was unfair of my parents not to prepare me for the small-mindedness of others. In retrospect, I think they owed me some information about my Korean heritage so that when I was faced with racism, I would have a firm, positive feeling about being Asian. On the other hand, it is also easy to understand why they felt uncomfortable about supplying me with a Korean identity. First-generation Americans of various races have immersed their biological children in American culture at the expense of their own ethnicities - but these parents had the luxury of sharing the same eyes, hair, and genes as their children.

The First Sting of Racism

Perhaps years of rocking me to sleep and answering my cries in the night had truly blinded my parents to our racial differences. Outsiders, however, were always eager to point them out. As my brother and I stood alongside three or four neighborhood kids waiting to start our first day of kindergarten, a busload of older students passed, and many hung out the window pointing to our group and yelled, "Chinese cherries! Look at the Chinese cherries!" Several boys pulled the corners of their eyes toward their temples to form "Chink eyes." They laughed and asked us what we had in our lunchboxes, chop suey?

I looked at the children around me. They were the same kids I had played hide-and-seek with ever since I had learned to walk. I didn't see any Chinese people. I craned my neck, and asked my playmates where the Chinese people were. As they began to snicker, my brother's face twisted in painful awareness. "Dottie, they're talking about us," he said. "We're the Chinese people."

I looked back at him in disbelief. We were not Chinese. We were Italians born in Korea, living in California. I vowed to ask my mother all about this when I got home. When the bus came, I purposely sat in the front so I could see my face in the driver's mirror. Relieved, I saw the same features that had stared back at me when I brushed my teeth that morning. When school was over, I came home and asked my mother what those kids had been talking about.

Her response was unsettling. She breathed a long sigh and said gently, "Well, honey, you and your brother do have sort of an Asian look, like many Chinese and Japanese people. This is something people are going to say to you for a long time."

Mother never told me whether it was good or bad to be Asian; she didn't have to. The mocking voices of the kids on the bus had told me that many people thought Asians were second-rate and not as good as whites. A wave of regret washed over my mother's face when she saw the tears streaming down my cheeks. She looked away quickly, said nothing.

That first day of school taught me that not everyone would see me as I saw myself — a little American girl who liked to show off by dancing to the Beatles. To many I would simply be the "Asian girl," my whole identity reduced to "someone who isn't white."

Today, I'm often asked by friends and acquaintances who've adopted nonwhite children whether I think it's important to address their child's racial identity. I tell them yes, that no matter how strongly they wish to ignore their racial differences, their child must also be ready to meet the world beyond the family — and for that a child needs a strong positive feeling about being Asian, Latino, Indian. It has taken me years of hard work to understand what it means to be Korean. There have been moments of great joy, but it has also been, at times, a lonely journey — a journey I wish my family had been willing to take with me when I was still a little girl.