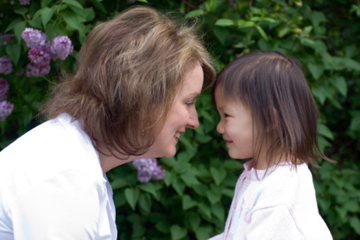 When Catherine Casey first met her daughter, she had reason to be relieved. After enduring infertility treatments and then patiently waiting nearly a year while the adoption process crept along, Casey was more than ready to meet her little girl. Finally, in May 1997, her wait was over. After a long flight to China, a chaotic six-hour van ride and a few nervously giddy hours at a local hotel with a small group of fellow adoptive parents, Casey and her husband, Stuart, met little LiAnn. "My first thought upon seeing LiAnn was that she was even more beautiful than her picture," Casey recalls. "When the orphanage nanny placed her in my arms, I think I felt that a great treasure had been bestowed upon me." Today, Casey, Stuart and 6-year-old LiAnn are happily settled into life as a family. And while Casey looks back on that day as one of the "coolest" days of her life, getting there required making some tough decisions, committing to an unknown outcome and drawing on an enormous reserve of patience. We talked to Casey recently about how she did it and what she learned. Here is her story:

A: Sure. We would have liked some real health information, but we had heard that the vast majority of babies coming from China are quite healthy. So, we relied on that. And as my husband had said from the start, "You don't know if you're going to have health with your biological child either, so it's always a risk."

A: Probably two things: one - and this is probably common among adoptive couples - was agreeing as a couple that this is what we wanted to do. My husband wasn't interested at all at first, and coming to an agreement on it was a big thing for us. I'll tell you a neat story about that, too. We were wrestling with this for a number of months, and once we finally made up our minds that we were going to adopt and adopt from China, we kept it to ourselves for a little while. During that time, a childhood friend of my husband's came to visit him and was kicking around in our back yard when he found a coin. It was a 19th-century Chinese coin, and I have no idea how it got there. When my husband told me about the coin, we just looked at each other and said, "That's the sign."

The second difficulty was the waiting. That was hard. Once it was done, it was certainly well worth it, but waiting the 12 months when you're so anxious to be a parent is hard. And waiting for six weeks after we got her picture was very difficult.

A: I talked to as many people as I could. I did a little informal networking through colleagues and connected with other people through the adoption agency and through Families With Children From China, an association for families adopting or considering adopting from China. I guess we were as prepared as we could have been. I don't think anybody understands what it is like to be a parent until you are one. Our agency did a good job preparing us. They had an extensive orientation and hooked us up with a pediatrician's office familiar with adoptions abroad.

A: I think she is fully adjusted. All of the children I know of that come from China have had some sort of developmental delays. Usually they are underweight, or they might not be walking, crawling or getting teeth as early as American babies. But by the time they are over here for a year, they are almost all caught up. In terms of her being "American," that took no time.

One of the good things about her being a different race is that it has made it easier for our family to talk about her being adopted. It is a big thing to deal with - talking to your child about being adopted - but if you look different from each other it comes up very naturally and early on. We've been talking about this since she was 2. We talk about her birth parents and what a wonderful gift it was that they gave her to us. One thing that is interesting is that when she was around 2 years old she used to make me role-play the adoption. She would have me pretend to be her birth mother leaving her at the orphanage, and then she would have me pretend to be the director of the orphanage and then act out my own role coming to get her. And we had to do it over and over again. I think it was her attempt to understand what was going on. And I know that all children are different, but I'm hoping that because we've been talking about it since she was little, it will be easier for her to deal with.

A: We do talk about it. We are members of Families With Children From China and have stayed in close contact with the other families we traveled to China with when we adopted our daughter. We try to celebrate Chinese holidays, we cook Chinese food, I read her Chinese fairytales, and we try to take her to Chinese cultural events. I have offered to sign her up for classes in Mandarin and in Chinese dance, but so far she's not too interested in that. I plan to make the option available to her, without cramming it down her throat. It's kind of interesting - when you are the parent of a child who was born in another country, you seem to become the biggest booster of anything that ever came out of that culture. And it's kind of fun to explore the culture with her and incorporate it into our family life.

A: Particularly for Caucasian parents adopting from Asia, you need to be sure you're ready to answer other people's questions about your family. There is another layer for the adoptive parents when you so obviously are the not the baby's biological parents. And your child is listening to everything you say and watching how you react. So, if someone says something insensitive, you may go home afterward and rail to your husband, but you can't do it in front of your kids. Having said that, I think that most parents who come up to us and talk about it are other adoptive parents. It's kind of fun to make that connection. One other piece of advice is that if people are at all worried about what I would consider normal developmental delays in international children, I wouldn't put too much stock in that. I would talk to the people at the adoption agency and pediatricians here who have worked with these children, because they do catch up. It's not a big deal. Sometimes there are going to be health problems, but this stuff about being underweight or not walking until they are 15 months old doesn't make a bit of difference in the long run.

A: We would definitely do it again. It turned out perfectly for our family. The only thing I would maybe do differently is sometimes I wish we had done it earlier and not wasted a lot of time and emotion on the infertility treatments. But then again, the timing was right for us. If we had done it another time, we wouldn't have gotten LiAnn. So I guess I wouldn't have done anything different after all.

Who should be on an emergency contact list and why?
Preventing Tantrums While Shopping
What's the best way to keep your kids from trying cigarettes?