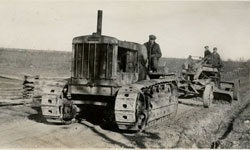 Imagine if you still had this beast in the family.
Photo courtesy of North Dakota.gov

To most of us, the stuff belongs in a junkyard. Very, very old machinery, perhaps not the most conventional of high-value items, can nonetheless mean a lot to a select few.

The Canadian Times & Transcript reports that Aubrey Maillet in 2010 found and bought the circa-1935 engine he had worked with more than 60 years before. The ancient, two-horsepower engine first powered the small, family-owned herring cannery that was his workplace at the age of 10 and later hauled lobster traps onboard the Maillets' fishing boat.

In South Dakota, the Olson family treasures a 1921 tractor that's been with them since the Prohibition era. According to Farm Collector magazine, this machine even works. The Olsons run it each year in the town parade so everybody can hear the engine roar.

Up next: It's not (exactly) a torture device.