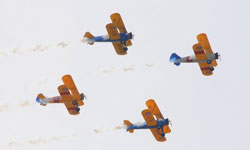 Airplanes are not the most traditional of heirlooms, what with their enormity and all.
Photo courtesy of U.S. Department of Veterans Affairs

Airplanes are not the most traditional of heirlooms, what with their enormity and all, but plenty of them are considered collectors' items and are therefore passed through generations -- something like vintage cars, only they require a special license to "drive" and won't squeeze into a garage.

Northern Arizona Today tells of Charles Downey of Arizona, a retired Naval aviator who has a vintage, 1941 Meyers light aircraft he considers a family heirloom (and a lucky one at that: He crash-landed it in 2009 and emerged without a scratch). Simon Kingston of Switzerland also has an heirloom plane, a 1930 Gipsy Moth housed in England. It was owned by his father years before, and, according to British newspaper EDP, is currently the oldest aircraft in Britain sporting a certificate of airworthiness.

Up next, an heirloom that calls for a freezer.