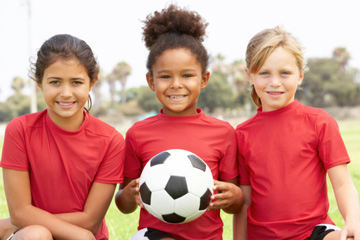 Safety is a key component to playing any sport.
iStockphoto/Thinkstock

School sports are a wonderful outlet for kids to learn the value of teamwork, build friendships and get fresh air and exercise. And while parents want their kids to have a good time and succeed at sports, they should also teach them the importance of playing sports safely.

Kids' growing bodies are simply more susceptible to injury than adults'. The Centers for Disease Control and Prevention reports more than 1 million sports-related injuries happen every year to kids under 15. Yet, a lot of them are preventable by adhering to the following five rules of sports safety. If boys and girls want to win at sports in the long run, they must take steps to protect their bodies.

Here are five ways to do just that.

After the game, kids may want to grab a juice box and go home, but their bodies deserve better than that. They should stretch out worn, tired muscles before heading to the victory party. That will also reduce the chances of post-game injuries and get them in better shape for the next match.

Athletes wear uniforms and sports gear for good reason: They make it easier to tell opponents from team members and protect players' bodies during the game. Think about all of the padding that football players pack on. Without it, their bodies probably couldn't withstand the beating they endure between the end zones. And you can bet that any NFL player worth his salt wouldn't play for a minute without the recommended gear.

Likewise, when it comes to school sports safety, kids ought to wear the right stuff. For instance, baseball players should put on their protective helmets when at bat. Also, young athletes should make sure that their equipment fits. A pair of shin guards that barely reaches above the ankles won't do much good when a soccer ball strikes. If kids wear glasses or participate in a sport that could injure their eyes, they should consider wearing protective eyewear. And if kids aren't sure whether something fits or how to it put on properly, they shouldn't hesitate to ask a coach before it's too late -- and they're sidelined for the rest of the season.

Keep Your Head in the Game

To properly play a game, whether football, badminton or even Monopoly, people first have to learn the rules. By understanding where to be, what to do and what to expect during the course of play, players can avoid accidental collisions and injuries. Then, once they're out on the field, kids should pay attention to what's going on around them. They should especially listen to coaches and teammates -- they're the extra eyes and ears to keep other teammates where they ought to be. Not only will that reduce the chance of getting hurt or hurting someone else, kids will also play better.

When exercising or playing an active sport, the body stays cooled off by sweating. However, if people lose too many fluids or don't drink enough, they could become dehydrated, which could lead to muscle spasms, heat stroke, kidney failure and other dangerous health effects. That's why it's important to stay hydrated during sports practices and games.

The National Institute of Arthritis and Musculoskeletal and Skin Diseases recommends drinking 8 fluid ounces every 20 minutes, if not more often. That way, athletes can replenish all of the water that they've been sweating out.

If kids become hot and sweaty and start to feel dizzy, weak, confused or nauseous, they're body may be sending signals of dehydration. They should alert a coach, take a break and drink some water. In hot weather, it's also good to drink beverages with electrolytes to restore sodium and potassium levels in the body.

As parents and teachers have repeated time again, rules are in place for a reason. In addition to knowing how to get points on the board for the team, young players should also be aware of what's not allowed. For instance, basketball players can't push their opponents in order to snag the ball. After all, if every game was an intense contact sport, there would probably be too many injured players on the sidelines. It's the coach's responsibility to teach players about such rules and regulations, and it's the athlete's duty to listen up accordingly.

Kids shouldn't just think about playing fast and hard; to succeed, they have to be smart and use their heads. That way, children will raise the odds of being healthy and strong for the next game.