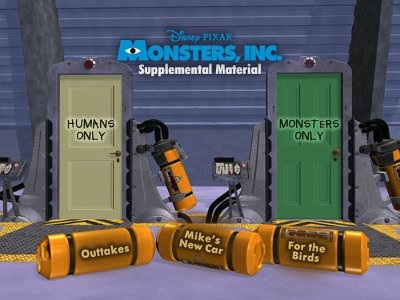 Copyright Disney Inc. Every kid has his or her favorite "Monsters, Inc." scenes.

Scene 2: "Monster in the Closet"

A little boy imagines that there are monsters lurking in his room at night. Suddenly, a real monster towers over his bed, and then an alarm goes off. The little boy isn't real; this is all a simulator for scaring practice at Monsters, Inc. The rookie "scarer," a monster named "Bile," is scolded by his instructor for the leaving the closet door open.

The president of Monsters, Inc., an octopus-monster named Mr. Waternoose, explains to Bile and the monster class the dangers of children. Then he tells them how monsters enter the human world through a closet door and scare children, and that the screams from the children are converted into energy that Monsters, Inc. uses to power the city of Monstropolis. He says the best "scarer" is a monster named Sulley.

We meet Sulley and Mike as they are waking up. Sulley is a blue furry monster, and Mike is a giant eyeball with two feet. Taskmaster Mike puts Sulley through his morning scare exercises, such as "Scary Feet" and "Don't Let the Kid Touch You." Afterward, they watch a Monsters, Inc. commercial (on TV) featuring themselves and their co-workers.

The monsters who work as scarers go to work, each entering a different door prepared by his assistant (Mike is Sulley's assistant). When they open the door, they can walk into a child's bedroom in the human world. They scare the kids and walk back into Monsters, Inc. and close the door. Randall is doing well and actually inches ahead of Sulley in his "scream numbers."

A scarer named Georgie steps back through a door with a child's sock stuck on his back. Alarms are sounded on the scare floor -- he is "contaminated!" The CDA, Child Detection Agency, descends onto the scare floor to destroy the sock and shave off Georgie's hair. Waternoose is not happy; the plant will be shut down for a half an hour.

Mike and Celia are having their date at Harryhauesen's, a sushi restaurant filled with monsters. Sulley interrupts their date to tell Mike about the child, but the toddler escapes from his bag. With one "Boo!," she scares all the monsters in the restaurant. Sulley and Mike sneak Boo out of the restaurant as the CDA descends.

Thinking Boo is in the trash compacter, Sulley hurries down to the trash bin to save her. Sulley is horrified as he watches the trash being crushed and chopped up; he thinks Boo is in it. She's actually in another part of the building, still disguised as a monster and playing with some monster kids. Finally, Sulley and Boo find her.

Sulley, Mike, and Boo find Boo's door waiting on the scare floor while everyone is at lunch, just as Randall said. Mike opens Boo's door and walks into her dark bedroom to prove it is safe, but he is mistakenly trapped (in a box) by Randall, who thinks Mike is Boo. Sulley and Boo hide while Randall makes off with Mike in the box.

Back together, Sulley, Mike, and Boo try to escape from Randall. While on the run, Celeste joins the group briefly and Mike tells her about Randall's plot. They finally make it to the scare floor and again look for Boo's door.

Sulley, Mike, and Boo are almost trapped by Mr. Waternoose and the CDA security force, but Mike sends them on a wild goose chase. Sulley walks Boo through her door and returns the little girl to her room and bed, but Waternoose follows them into Boo's room. While Sulley and Waternoose fight in Boo's room, Waternoose reveals his plan to kidnap children and hook them up to the scream extractor. But the joke is on Waternoose. It's not really Boo's room, but the Monsters, Inc. simulation room, where he has been recorded on tape. The CDA security forces take him away.

Mike sneaks into a child's bedroom at night, but instead of scaring the little boy, Mike tries to make him laugh with lame jokes. As a last effort, Mike does an enormous burp, which makes the child laugh. It turns out that laughter produces ten times more energy for Monsters, Inc. than screams did, so now it's the "laugh floor."

Walt Disney once said that every child loves to be scared. That's never been more true than with "Monsters, Inc.," a film that provides fun-filled frights again and again. After you and your child finish watching it, don't forget to close your closet door.

Michael Allen is a Los Angeles-based writer whose credits include animated series on MTV and Nickelodeon. His favorite cartoon of all time is "Scooby Doo."