The Music in 'Monsters, Inc.' 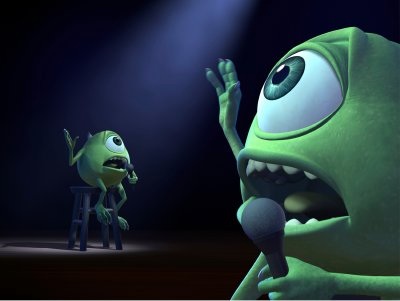 "Monsters, Inc." marked the fourth feature-film collaboration between Pixar and acclaimed composer/songwriter Randy Newman. His work on this film includes a delightful score using 1940s jazz and big band influences, as well as an end-credit tune called "If I Didn't Have You," sung by John Goodman and Billy Crystal.

"He's created memorable themes for each of the main characters," says director Peter Docter. "Sulley's theme is kind of heroic, while Mike's is a bit on the jazzy side with woodwinds."

Adding to the uniqueness of Newman's score for "Monsters, Inc." is an unusual assortment of instrumentation. Bass harmonica, an accordion, marimbas, cimbasso (a cross between a tuba and a trombone), bass oboes, and saxophones are among the instruments that give the score its offbeat sensibility.

Says Newman, "All pictures require a lot of moods, but this was a different world entirely that you had to conjure up musically. It's like the real world, with people going to work, except they're monsters. Hopefully, the score heightens the emotions and the precariousness of the dangerous situations."

Everyone has a favorite scene in "Monsters, Inc." For a scene-by-scene breakdown, go to the next page.