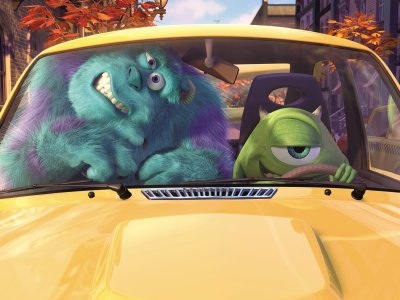 "Monsters, Inc." is one in a line of classic animated films made by Pixar. How exactly does the Pixar animation process work? It begins when a Pixar employee suggests his or her idea to the development team in a way that is reminiscent of a sales pitch. Then a treatment is written -- a short outline that summarizes the main idea of the story. Sometimes many treatments of the same story are written before one is chosen as the working narrative.

After the treatment is completed, the script is written and the storyboards are drawn. Storyboards are like a hand-drawn comic-book version of the movie and serve as a visual blueprint for the action and dialogue. Using these guidelines, the artists envision their assigned sequences, draw them out, and then pitch their work to the director.

Temporary "scratch" voices are then recorded for the storyboard reel. Later when the story and dialogue are further along, professional actors will record the dialogue, both using the script and ad-libbing. Actors must record their lines different ways, and the best reading is animated. Sometimes, though, the scratch voices are so good they are animated.

Next the characters, sets, and props are either sculpted by hand and then scanned three-dimensionally or modeled in 3-D directly in the computer. They are then given "avars," or hinges, which the animator will use to make the object or character move. Some characters have 100 avars in their face alone.

For the next stage, the sets are built in 3-D and "dressed" with prop models, such as chairs, curtains, and toys. To create a believable world, set dressers work closely with the director to ensure that the director's vision is being realized.

Next the shots are laid out. To translate the story into three-dimensional scenes, the layout crew choreographs the characters in the set and uses a "virtual camera" to create shots that capture the emotion and story point of each scene. Multiple shots are taken, and the best ones are cut.

Once a scene has been cut, the final version is released to animation. Pixar's animators neither draw nor paint the shots, as in traditional animation. Because the models, characters, layout, dialogue, and sound are already laid down, the animators are like puppeteers. Using Pixar's animation software, they choreograph the movements and facial expressions of the characters in each scene. They do this by using computer controls and the characters' avars. The computer then creates the in-between frames.

Next the sets and characters are shaded. The shading process is done with "shaders" -- software programs that allow for complex variations in the color and color-shaping. For example, the process allows colors to shift in different lighting, such as the reflections in a character's eyes.

Lighting then completes the look. Using digital lights that act in the same manner as stage lighting, every scene is illuminated. Key, fill, bounce lights, and room ambience are all defined and used to enhance the mood and emotion of each scene.

The next step is rendering, which is translating all of the information in the files that make up the shot -- sets, colors, character movement, etc -- into a single frame of film. Each frame represents 1/24 of a second of screen time and takes about six hours to render. Some frames have taken as long as 90 hours.

In the final part of the process, the musical score and other sound effects are added. Then the photo science department records the digital frames to film or to a form appropriate for digital projection.

What's an animated feature without music? In the next section, we look at the tunes in the "Monsters, Inc." cartoon.