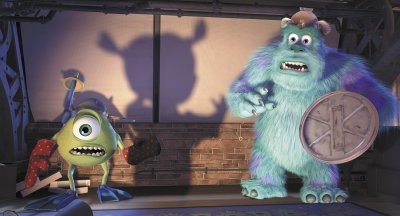 Multiple elements went into creating the characters in "Monsters, Inc." In this section, we'll examine this painstaking process.

Clay sculptures of the faces were created and digitized for the main characters, while nearly 50 other miscellaneous monsters were formed in the computer from a kit of virtual parts. Learning from their experience on previous Pixar projects, the two "Toy Story" films and "A Bug's Life," the modelers used a proprietary program called "Geppetto" to add more controls, allowing the animators more subtle movements.

Animator John Kahrs spearheaded the production of Sulley, the massive monster who finds himself in a world of trouble. "John Goodman's vocal performance was really rich and had a lot of range," says Kahrs. "It had a wonderful rhythm and a lot of texture. There is a resonant warble to his voice, almost bear-like, and it fits the character so well. I would get direction from his performance."

Guiding the animation for the character of Mike Wazowski, the feisty one-eyed ball of energy, was character lead animator Andrew Gordon. Says Gordon, "Billy Crystal [who voiced the part] would take a line and go off on lots of tangents with ad-libs and comedy routines. Basically, Mike is a giant eyeball. I would videotape close-ups of my eyeball to see what the eye was doing when my eye looks up and how the eyelid reacts. Little things like pupil changes became important."

The lead animator on Boo was Dave DeVan, who at the time was a five-year Pixar veteran. "Boo has been the most challenging character I've worked on at Pixar," DeVan said during the production process. "Some of the animators would bring their kids into the studio after work, and Mary Gibbs [the voice of Boo] came to my office one time. She had been eating jelly beans and had lots of energy. She was really playful and gave the character exactly what was needed.

"I was helping to make sure we got the control that we wanted and that the face was as fleshy and expressive as possible. The final character has about 900 animation controls. Humans have always been tough to do in computer animation but with 'Geri's Game' [a Pixar animated short], and this film, Pixar has made some great progress."

That's the scoop on the characters -- but what about their fantastic world? We cover that in the next section.