The Future of Elmo 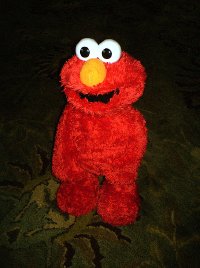 Elmo's adventures are broadcast daily on the current season of "Sesame Street," available on videos and DVDs, and his likeness appears on everything from toys to books to clothing.

Elmo has been brought to new, larger-than-life dimensions at Sesame Place, a theme park located near Philadelphia in Pennsylvania that is based on "Sesame Street." In May, 2006, a 21,000-square-foot Elmo area, aptly named Elmo's World, opened within the park. Sesame Place, a licensee of Sesame Workshop and a division of Busch Entertainment Corporation, offers more than three-dozen interactive activities, including water attractions, a roller coaster, and live stage shows.

Another new venture for Elmo is a reincarnation of an old favorite. The new toy T.M.X. Elmo (the "X" in T.M.X. stands for "extreme") was timed to match the 10th anniversary of Tickle Me Elmo, the must-have toy that giggled when its stomach was pressed. The new-and-improved version made its debut on ABC's "Good Morning America" in early October 2006 and instantly had customers lining up at stores nationwide.

Dr. Rosemarie Truglio, of Sesame Workshop, let us in on a secret for what to expect from Elmo. "I just found out that in 2007 Season 38, Elmo will be learning about mouths, noses, violins, and the beach," she said. "I read one of the scripts, and even I learned something. "I didn't know that a whale is the only animal that has just one nostril. Did you?"

It's just one more example of how Elmo gives learners -- both big and small -- something informative and fun to think about.