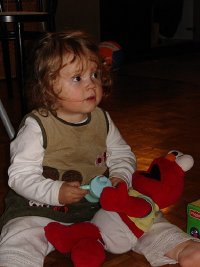 ©
Whether he's on the TV or sitting on their lap, kids love Elmo.

Then star of "Elmo's World" is, of course, Elmo himself, but his co-stars and friends are critical to the show's success as well. The following is a look at each "Elmo's World" character.

Elmo is a three-and-a-half-year-old furry red monster with an infectious giggle. Elmo is also known for refering to himself in the third person. Enthusiastic, friendly, and always cheerful, he wants to be part of everything that goes on. Like most preschoolers, he sometimes doesn't have the knowledge or skills to do the things he wants. Although it can cause some interesting predicaments, it never stops him because he has a very positive, optimistic view of himself and life.

In the current "Elmo's World" segments for Season 37, Elmo, Dorothy (his pet fish), and Mr. Noodle cover topics such as friends, penguins, doctors, building, horses, and fast/slow. In a street story, Elmo plays pretend school with Alan. They sing the alphabet, read stories, and draw while Alan works at Mr. Hooper's Store.

Dorothy, a goldfish who can understand Elmo through her goldfish bowl, is Elmo's best friend. Dorothy is inquisitive and possesses an active imagination. Whatever topic is explored, the audience gets to see into her imagination as she visualizes the subject and concepts of the episode. Unlike some of the character's in "Elmo's World," Dorothy is not a muppet nor a part of Elmo's imagination -- she is a real, live fish.

Mr. Noodle is a silent, Charlie Chaplin-like character who helps Elmo explain the word or topic of the day. Elmo often asks Mr. Noodle to demonstrate how to perform a chore or answer a question. He responds through pantomime but invariably gets the process wrong or fails to follow Elmo's instructions. Through trial and error and a lot of silliness, Mr. Noodle usually manages to figure it out.

As Mr. Noodle's brother, also named Mr. Noodle, late Tony and Emmy awards-winning actor Michael Jeter demonstrated concepts through a process of trial-and-error while letting children know that it is OK to make mistakes. Jeter passed away in 2003, but his role as Mr. Noodle can still be seen in repeat "Elmo's World" segments.

Learn what's in store for each of the characters in our "Elmo's World" episode guide. It's in the next section.