Playing and Learning With Elmo 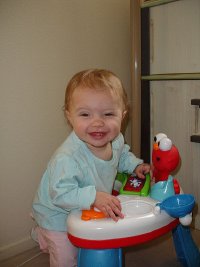 © Kelly Williams "Sesame" Street" products are tested thoroughly before they get into the hands of young consumers.

Since it's part of "Sesame Street," each "Elmo's World" episode is based on extensive research and is created to deliver specially targeted educational messages.

"We have a model we follow from the very beginning of the creation process. It really keeps the focus on the educational value and objectives," said Rosemarie Truglio, Ph.D., vice president of "Sesame Street" Education and Research. Called the Sesame Workshop Model, the approach equally integrates research, educational content and production.

The process starts with the "Sesame Street" curriculum document, created by the advisory team. "The team that comes up with the messages behind 'Elmo's World' [is made up of] developmental psychologists, early childhood educators, and other experts in the area of children's health," said Truglio.

The curriculum document guides all aspects of production, and includes educational goals and the messages for the writers to address in their scripts. "The writers must hit the outlined messages several times throughout each episode," Truglio said.

If the writers somehow miss the target messages, or if there are issues with the execution of the goals, they are addressed with the writers during the script review. The writers understand that the educational message is important and make changes when needed.

"Then we test our product with real preschool children," said Truglio. "We observe them watching the show and conduct one-on-one interviews afterwards."

The "take-away messages" built into every episode of "Elmo's World" are among the key things that make the show unique. For example, the episode about dogs teaches that dogs need water, food, and exercise to stay healthy. Viewers learn that dogs communicate by barking and wagging their tail, and children should never pet a dog they don't know. An episode about the sky explains the objects children might find in the sky (such as the sun, moon, and clouds), and that some things can be found both in the sky and on the Earth (such as kites, airplanes, and birds).

Truglio says that because "Elmo's World" is so focused and child-friendly, it is well-suited for parents to reinforce the learning elements with their child after the show.

"Because each show is topic-driven, it's easy to do your own discovery and exploration," said Truglio. "From an educator's point of view, 'Elmo's World' is the perfect springboard for parents and caregivers to keep exploring and learning with the concepts found in 'Sesame Street' at home."

In the next section, we'll meet some of the characters that your preschooler will learn from when watching "Elmo's World."