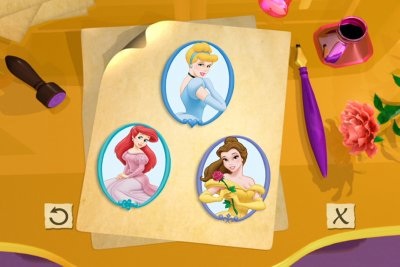 Disney Princess extends into all forms of media. This is from an interactive video.
© Disney. All rights reserved.

By combining all of the princesses under the single umbrella brand of Disney Princess, Disney has created another media empire for itself. We've gathered the most popular requests in this section. For a full media guide, download the PDF here.

By far the most popular home-video releases starring the Disney princesses are their original feature films, from "Snow White and the Seven Dwarfs" to "Mulan." The Disney Princess line united all the previously unrelated princesses under one banner that could be used to market all sorts of new media titles and products.

Most Disney Princess home-video titles are produced in-house by the Walt Disney Home Entertainment division, or by independent contractors who, whenever possible, work with existing film footage to create new compilations and montages. As available "in the can" materials have been recycled, producers have had to imaginatively create fresh, novel projects by using simple live action and narration, inexpensively produced animated footage, and bonus multimedia features that include interactive games and printable elements.

All are highly commercial mass-market products designed for a relatively short shelf life to satisfy very young viewers who are hungry for new princess products. Older titles are no longer available, but content from some have been reused to create newer releases. The most popular Disney Princess home video titles -- some available in both DVD and VHS formats -- include:

Not surprisingly, the future of Disney Princess is bright. We'll examine that future in the final section.