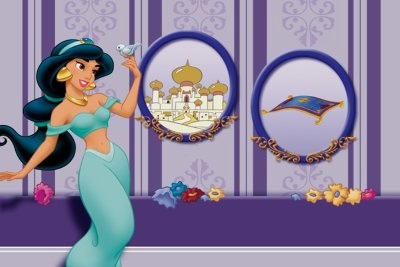 Jasmine is a modern Disney princess.
©Disney. All Rights Reserved.

Jasmine, Pocahontas, and Mulan are different from the other Disney princesses because they're not European royalty. Jasmine, from "Aladdin," is a sultan's daughter; Pocahontas is the daughter of a Native American chief; and Mulan is originally from Chinese mythology.

Jasmine is a glorious, fiercely independent, sharp-tongued princess, but she's also just a supporting player in the 1992 Walt Disney Pictures film "Aladdin." The star is, naturally enough, Aladdin, a wily street-urchin who lives in the large and busy Arabian town of Agrabah long ago with his faithful monkey pal Abu.

When Princess Jasmine gets bored remaining in seclusion in the luxurious palace that overlooks the city, she sneaks out to the marketplace, where she accidentally meets Aladdin. Under the orders of the evil Jafar (the sultan's advisor), Aladdin is thrown in jail and becomes caught up in Jafar's plot to rule the land with the aid of a mysterious lamp. Legend has it that only a person who is a "diamond in the rough" can retrieve the lamp from the Cave of Wonders. When Jafar realizes that Aladdin fits that description, he tries to blackmail him in a plot to marry Jasmine in order to steal the sultan's power.

With double identities and magical wishes confusing everything, Aladdin rises above his moniker as an untrustworthy street rat and finds a way to win Jasmine's hand in marriage to show everyone that he is a prince at heart.

"Aladdin" is supposedly based on the traditional story from "A Thousand and One Nights," but this is not really the case. It is an original story that owes more of its plot to classic black-and-white Hollywood films like "The Thief of Baghdad," starring Douglas Fairbanks, than the French rendition written about Arabia in the 1700s from a European point of view. The Disney team added a liberal dose of fantasy and surrealism to the basic idea to give the film its stunning visual beauty.

When it was first released, Islamic groups were offended by some of the film's song lyrics that vilified the character Jafar in stereotypically racist ways, causing Disney to wisely and sensitively make changes for later releases. Two direct-to-video movies followed -- "The Return of Jafar" (1994) and "Aladdin & the King of Thieves" (1996) -- and a cartoon TV series.

Unlike any of the Disney princesses before her, Pocahontas is a historical figure not associated with European royalty and so is considered an "honorary" Disney Princess due to her reputation as a heroine and role model. Her fabled life as a noble and brave Native American girl, has largely been fictionalized in various legends, and again her story was altered for the making of the 1995 Walt Disney film "Pocahontas."

In it, Capt. John Smith leads a ship of English soldiers to the New World to plunder gold for English Governor Ratcliffe. Meanwhile, the "New World" native Chief Powhatan has pledged his daughter, Pocahontas, to be married to the village's greatest warrior, much to the disapproval of smart, independent Pocahontas.

A vision of a spinning arrow foretells Pocahontas that change is coming, and it does as soon as the English ship lands near her village. Between Ratcliffe (who believes the "savages" are hiding the gold he lusts for) and Powhatan, who believes these pale newcomers will destroy their land, Smith and Pocahontas have a difficult time preventing all-out war, and saving their love for each other.

"Pocahontas" is Disney's 33rd animated film, and one of the most emotionally moving Disney films of all time. It was very carefully developed with sensitivity to Native American history and culture. It goes even further by delivering anti-racist messages, making this a landmark animated film.

As Disney's first film based on fact, it is a movie that doesn't just entertain -- it has something important to say. The studio wanted a someone with cultural authority to say it, so the voice of Pocahontas was performed by Irene Bedard, a Native American. Broadway singer Judy Kuhn provided Pocahontas' singing voice. Trivia fans will note that "Pocahontas" features the first-ever on-screen death of a protagonist -- the brave Powhatan warrior Kocoum.

While the film received praise for its stunning art, and an Academy Award for the song "Colors of the Wind," it also received considerable criticism for rewriting history for the sake of storytelling. As had become a Disney tradition, the feature film yielded a 1998 direct-to-video sequel, "Pocahontas II: Journey to a New World."

Like Pocahontas, Mulan is an official member of the Disney Princess club -- but she is, in fact, a multi-cultural heroine, not a true princess. She is a brave Chinese woman based on an ancient Chinese myth that's nearly 2,000 years old. Real or not, the 1998 Disney Pictures film "Mulan" retells the story about a young Chinese maiden who wants to honor her family but seems destined to fail.

She puts herself in harm's way when she learns that her weak father is to be drafted into the army to fight the invading Huns. Knowing that he would never survive the rigors of war in his state, she decides to disguise herself as a man and join in his place. Unknown to her, her ancestors are aware of this, and to prevent it, they order a tiny disgraced dragon, Mushu, to join her and force her to abandon her plan. He agrees, but when he meets Mulan, he learns that she cannot be dissuaded and so decides to help her in the perilous times ahead. In the process, Mulan becomes Disney's most feminist protagonist to date.

Like Mulan, Disney wished to honor Asian cultures by devoting an animated film to an Asian story. Mulan was developed by folktale expert Robert D. San Souci and was released June 5, 1998, outperforming earlier films "The Hunchback of Notre Dame" and "Hercules." It was the first feature made at Walt Disney Feature Animations Florida, Disney's 200,000 square-foot, state-of-the-art animation studio in Orlando.

The artistic approach to the film was based on the Chinese "sing" style of "negative," or empty, spaces balanced by "positive" detail -- almost a "yin and yang" concept. The movie's artistic supervisors spent three weeks in China sketching, photographing, and soaking up the culture. Computer animators used the latest technology to add detail and mimic camera techniques that were previously unavailable in animation -- such as crowd scenes of up to 30,000 people. They used a computer program called "Atilla" to make an incredible sequence featuring 2,000 Huns on horseback. Mulan is portrayed by actress Ming-Na, with her songs performed by Lea Salonga.

If your little princess is driving you nuts requesting to see her favorite Disney Princess scene again, have no fear. We've created a media guide for you in the next section.