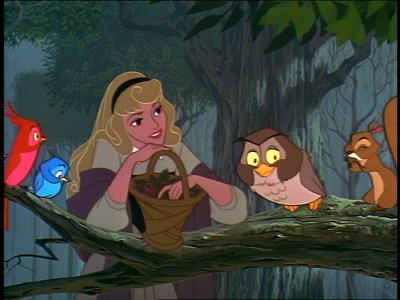 Sleeping Beauty is one of the most-loved Disney Princesses.
©Disney. All Rights Reserved.

Cheerful, beautiful and sunny, it's no wonder that Cinderella is the most famous and beloved princess of all time. Unlike most other Disney princesses, Cinderella is not born of royal blood -- she marries into her royal role. Sleeping Beauty, on the other hand, is a more typical Disney princess because she comes from a royal line. Here's a look at both of these classic Disney characters:

Like all classic fairytales, Walt Disney's "Cinderella" begins once upon a time. A wealthy widower decides to marry Lady Tremaine so his young daughter can enjoy a mother's love. His new wife, however, refuses to share her scant affections with anyone but her own two comical but mean daughters, Anastasia and Drizella. When the widower dies, the cruel stepmother enslaves Cinderella to work as the trio's kitchen maid. Lonely Cinderella carries out her duties honorably and is befriended by some mice and bluebirds, Bruno the dog, and Major the horse, much to the dismay of the spoiled and hostile Lucifer the cat. Cinderella's routine is disrupted when she hears of a royal ball. The King wishes for his son to marry, so orders the grand Duke to gather every eligible female in the land.

The competitive "ugly" stepsisters lock away Cinderella to better their chances to win Prince Charming's hand in marriage. Still hopeful, Cinderella and her animal friends assemble a sweet gown from scraps and one of her mother's old gowns, only to have it shredded to bits by the jealous stepsisters. Dejected, Cinderella is visited by her fairy Godmother who magically makes the dress into a masterpiece, a pumpkin into a beautiful carriage, white mice into horses, and the dog into a footman. But Cinderella is warned: the magical spell ends at midnight.

At the ball, Prince Charming falls in love with Cinderella at first sight, though her identity is concealed. As he is about to propose marriage, the clock strikes midnight and Cinderella flees, losing a glass slipper. The prince finds it and, heartbroken, vows to try it on every foot in the kingdom until he finds the girl who it fits. When Prince Charming and the royal Grand Duke reach Cinderella's house, the cruel stepsisters try to hide her away, but they cannot pull off the charade. Cinderella appears, reveals the matching slipper, and wins his heart.

Walt Disney's animated feature film "Cinderella" debuted on February 15, 1950, and audiences responded with a tremendous Valentine's gift: their kiss of approval. After a string of animated films that failed to earn back their costs -- notably "Pinocchio" and "Dumbo" -- it became one of Disney's all-time greats, reaffirming the studio's reputation for exceptional filmmaking, and again rescuing the studio from financial ruin. In its original release, "Cinderella" earned even more at the box office than "Snow White," though it was never given the same critical respect.

In the Disney film, the highly sympathetic Cinderella is endlessly kind, patient, hard-working, and unassuming -- no matter how cruelly she is treated by her exaggerated, cartoonish foes. Unlike Disney's passive, naive Snow White, Disney's Cinderella is a princess who decides to take charge and change her life for the better, rather than just wait for things to happen that might solve her problem. Her savior -- Prince Charming -- is little more than an anonymous character or prop, a symbol of love, happiness, and wealth. For comic relief, Disney invented several sidekick characters, including animal friends.

"To some stories a film version can give wider scope and even add characters without damage to the original," Disney said at the time. Regarding Cinderella herself, Disney said, "I see her not as goofy or stupid, but rather as having a wonderful sense of humor…She has to be real and she has to be someone that you can feel sympathy for."

Sleeping Beauty's "real" name is Aurora, named by her overjoyed royal parents for her hair, the color of sunrise. Her father, King Hubert, promises that she will one day wed Prince Phillip, the son of a neighboring king, to unite the two kingdoms.

Three good fairies are invited to Aurora's birth celebration, but not the evil Maleficent, who gets even by cursing the baby princess to die before her 16th birthday by pricking her finger on a spinning-wheel spindle. To save her life, the good fairies hide her away and raise her secretly under the name Briar Rose in a wooded cottage. Not knowing her royal heritage, Briar grows up safe and sound but lonely for company. When a handsome prince, who happens to be Prince Phillip, rides through Briar's woods one day, they fall in love and plan to meet again that evening.

Unfortunately for Sleeping Beauty, it is the night of her 16th birthday when the fairies are instructed to return her to her royal life at the castle where she will be crowned princess. She is hidden away, but the still-vengeful Maleficent lures her up a winding staircase to a room housing the kingdom's only spinning wheel. She pricks her finger and falls into a deep sleep, thanks to a good fairy's protective spell. Only the prince's kiss of true love will awaken her and assure they live happily ever after.

Does the plot sound familiar? Walt Disney chose to make "Sleeping Beauty" because its plot was nearly identical "Snow White and the Seven Dwarfs," a film that was so successful it saved the studio. After World War II-time films like "Pinocchio," "Dumbo," and even "Bambi" lost money, Disney needed another hit very badly.

Walt Disney Studios released the animated feature film "Sleeping Beauty" on January 29, 1959. It took nearly ten years and $6 million dollars to make: more than any other animated cartoon that preceded it. Although Disney didn't realize it at the time, it would be the last of the great fairytales ever produced by the studio, mainly because it performed rather poorly, earning bad reviews and less than $8 million in its first release. Today it is considered one of the finest films ever produced by Disney, and the film's royal star, Princess Aurora (aka Briar Rose, performed by Mary Costa) reigns as one of Disney's most popular female characters of all time.

"'Sleeping Beauty' is a milestone of a certain type of film that we never did again," said Marc Davis, one of the film's directors and principle animators. "We did a lot more design with the characters than we had ever done before. Sleeping Beauty herself was designed in a two-dimensional way." She was made even prettier and more mature than Cinderella to make the film Disney's most romantic to date.

Now let's consider the princesses Ariel and Belle. They're examined in the next section.