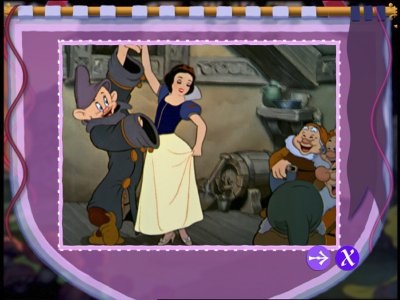 Snow White is one of Disney's most famous creations.
© Disney. All rights reserved.

"Until a character becomes a personality it cannot be believed," said Walt Disney himself, explaining why he devoted so much of his life to the painstaking creation of unique cartoon characters. "Without personality, the character may do funny or interesting things, but unless people are able to identify themselves with the character, its actions will seem unreal. And without personality, a story cannot ring true."

Snow White's story is one of the most well known. Once upon a time, there lives a lovely little Princess named Snow White, whose wicked stepmother, the Queen, fears that one day Snow White's beauty will surpass her own. The Queen dresses Snow White in rags and forces her to work as a maid. A prince falls in love with her, infuriating the jealous Queen. So that she can be the "fairest in the land," the Queen instructs her huntsman to kill Snow White. He cannot force himself to do it, and he lets Snow White flee.

She takes refuge in the cottage of the Seven Dwarfs, until the wicked Queen discovers she still lives and transforms herself into an ugly hag to murder Snow White with a cursed, poisoned apple. Her plan succeeds, and Snow White "dies," though she can be rescued from death by "true love's first kiss." Surrounded by grieving dwarves and animal friends at her funeral, Snow White is rescued by the prince on his white stallion.

Snow White herself is a technical marvel. The part was played by 18-year-old Marjorie Belcher who mimed the role for film so the animators could draw realistic movement. During the early stages of production for "Snow White," Disney wrote: "The artistic development of the cartoon is remarkable. We make our characters go through emotions which a few years ago would have seemed impossible to secure with a cartoon character. Their facial expressions and actions are worked out very carefully to be certain that they will not be overdone to the point of being silly ... it must all appear natural to be effective. It has been said that some of the action produced in the cartoon of today is more graceful than anything possible for a human to do."

Of all the Disney princesses, Snow White is perhaps the least beautiful princess. Walt Disney preferred that she appear girl-next-door-pretty, innocent, and quite young -- somewhere between 12 and 14 -- with a trace of adolescent plumpness. He also insisted that her voice sound young and rejected such famous actresses of the '30s such as Deanna Durbin in favor of operatic-trained Adriana Caselotti, the daughter of a Hollywood singing teacher. During production, animators had to talk Disney into letting them make Snow White look older so that she wouldn't seem too young to fall in love.

"They didn't want her to look like a princess," said Grim Natwick, one of two animators in charge of drawing Snow White. "They wanted her to look like a cute little girl who could be a princess…sweet and graceful. Nobody had ever done a human character like this. It was new for all of us."

The simple story made history when it was first released on December 21, 1937, and has since become an incomparable screen classic. It was the very first feature length animated film ever made, and Walt Disney did it when everyone else said it was foolish. Drawn completely by hand, it took three years and more than 250,000 pictures made by 750 artists (who actually drew more than two million images in all).

It cost a fortune to make -- $1,480,000 when Disney originally planned to spend just $500,000 -- though no one knew if an audience would even be interested in a full-length cartoon since they were used to cheap shorts. The smash success of "Snow White and the Seven Dwarfs" upon release was especially sweet. A technical and artistic masterpiece, audiences loved it, and critics called it "the greatest moving picture ever made." The film earned an astonishing $8,000,000, saved the studio from collapse, and mapped out the future for Walt Disney Pictures.

On the next page, we'll look at two of the most popular Disney princesses, Cinderella and Sleeping Beauty.