Behind the 'Cars' Story 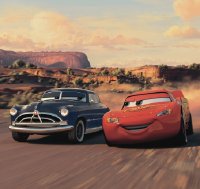 Copyright Disney/Pixar. All Rights Reserved The beauty along Route 66 inspired the settings for "Cars."

"Cars" is a personal story for John Lasseter, the movie's co-director. As a boy growing up in Whittier, California, he loved to visit the Chevrolet dealership where his father worked as a parts department manager. He even got a part-time job as a stock boy as soon as he turned 16.

"I've always loved cars," Lasseter says. "In one vein I have Disney blood, and in the other there's motor oil, so the notion of combining these two great passions in my life -- cars and animation -- was irresistible. When Joe [Ranft, Lasseter's co-director] and I first started talking about this film in 1998, we knew we wanted to do something with cars as characters. Around that same time, we watched a documentary called 'Divided Highways,' about the interstate highway and how it affected the small towns along the way. We were so moved by it and began thinking about what it must have been like in these small towns that got bypassed. That's when we started really researching Route 66, but we still hadn't quite figured out what the story for the film was going to be."

Lasseter packed his entire family into a motor home and set out on a two-month trip with the goal of staying off the interstate highways and dipping his toes into both the Pacific and Atlantic oceans. The trip brought the family closer together than ever. "Suddenly I realized what the film needed to be about," he says. "That the journey in life is the reward. It's great to achieve things, but when you do, you want to have your family and friends around to help celebrate."

The story took off from there, with Lightning McQueen being focused on nothing other than being the fastest car in racing. "He was the perfect character to be forced to slow down, the way I had on my motor home trip for the first time in my professional career," Lasseter says. "The unique thing about Pixar films is that the stories come from our hearts. They come from things that are personal to us, and that move us. This gives special meaning to the films."

The Roadmap to Radiator Springs

Central to the plot and themes of "Cars" is the iconic Route 66, along which much of the story takes place. A great believer in research and first-hand experience, Lasseter returned to the road -- this time with his key creative team -- to help them prepare for their assignment.

Lasseter, Ranft, producer Darla Anderson, production designers Bob Pauley, and Bill Cone, along with four other key members of the production team, flew to Oklahoma City and headed out from there in a caravan of four white Cadillacs on a nine-day trip along Route 66. Author Michael Wallis -- a Pulitzer Prize-nominated historian who has explored Route 66 for more than 60 years -- led the expedition and provided a running narrative via walkie-talkies.

"Route 66 is a mirror held up to the nation," says Wallis. "This highway is the most famous in the world, and it represents the great American road trip. It's a chance to drive from Chicago, through the heartland and the Southwest, past ribbons of neon, across the great Mojave, to the Pacific shore at Santa Monica. Every road has a look based on where the road goes. The look of Route 66 is everything from the licorice-colored soil of Illinois to the desert sands of the Mojave. It's the all-American look."

The team soaked up the atmosphere, even taking soil samples to color its animated scenes with the patina of the Southwest. Careful studies also were made of rock and cloud formations and the variety of vegetation. Painted advertisements on the sides of buildings, weathered and overlaid, were of particular interest. In addition, the crew went to small cafes, mom-and-pop shops, and motels, talking to hitchhikers, cowboys, waitresses, and mechanics.

One of the most meaningful moments occurred in Arizona on the side of a road. "It was a beautiful road that wound perfectly around the environment, right next to the interstate that went right through a beautiful butte," recalls Pauley. "As we were sitting there, a truck pulled up with an older Native American and his grandchild. He asked us, 'How do you like our land?' We told him how beautiful it was, and he told us that he was out here when they blasted the cutaway for the big highway through his ancestor's sacred land. It was a powerful moment. We saw how the interstate sliced through the land without any care or respect at all."

In the next section, we'll find out how Pixar's creative team used this research to come up with the production design.