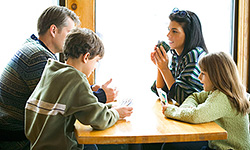 Simple games are fun for kids (and parents!).
Thinkstock

Family game night can be an inexpensive way to spend time with your kids, but it doesn’t have to mean stockpiling pricey board games full of easy-to-lose pieces and complicated rules. Instead, you can DIY these classic parlor games with minimal supplies: a dictionary, a pencil and paper, or, in some cases, nothing more than your imagination (and maybe a kitchen timer). Bonus: Bring these out at your next extended family gathering, too, to create memorable moments for all of your guests.

It turns out there’s a reason you’ve been keeping that massive dictionary around instead of just turning to the search app on your phone: It’s key to playing the Dictionary game. One player chooses a word from the book (that none of the other players have heard before) and the rest of the players write down a fake definition for it. The player who picked the word shuffles the suggested definitions and adds a card with the correct answer, then reads all the definitions aloud; players vote for which definition they think is the real one, and earn points for getting it right or for coming up with the most popular fake definition.

Charades is one of the all-time classic party games, but for families in the TMZ era, Celebrity puts a twist on the standard “acting, no talking” format. All of the words that go into the to-be-guessed pile should be names of people – here, “celebrity” means any person that the majority of the players would know, whether that’s Luke Skywalker, George Washington, or Aunt Gladys. In the first round, players can say anything they want -- except parts of the person’s name -- to get their team to guess the right answer. When all the names have been guessed, move onto the second round, where players can only say one word. Then in the third round, keep your mouth shut: Here, as in classic Charades, you can only act.

The Alphabet Game is a great one to play in the car, sitting around the dinner table, or waiting in line with antsy kids. Start by choosing a category – this could be anything: states, cities, animals, movie titles, famous people – and then go around the group with each player naming something in that category starting with the next letter of the alphabet. It sounds deceptively easy (alligator, bumblebee, cat, etc.) but it requires quick thinking and a broad knowledge base to win.

Another classic no-pieces required game, Twenty Questions is the kind of game you can play anywhere, anytime, with any number of players. One person thinks of a person, place, or thing – either that they can see in the room or not – and the rest of the players take turns asking one question each until they can guess it. And of course you can always start with the traditional question: “Is it bigger than a breadbox?”

If you’ve got pencils, pens, and a place to sit and write, then round up your family for a game of what Family Game Treasurehouse calls “Guggenheim” (we didn’t know it had an official name!). Here’s how it works: Make a chart with five categories going down the page and one word going across the top, and hand a copy out to each player. The idea is to find one word in each category that starts with each letter in the word you chose. For example, if you’re playing at the holidays and you choose the word “Santa,” and your first category is U.S. states, you could fill in South Dakota, Alabama, New Mexico, Texas, and Arkansas. But there’s one catch: if another player chooses the same word that you do, neither of you gets a point for it (or, in a variation, you get one point for any correct answer and two points if no one else chooses it). This is a game that’s easy to customize for your family since the categories and the word can be literally anything: category ideas could include animals, names of family members, movie titles, song lyrics, television show characters, superheroes, or vacation spots, and the top word could be holiday-related, the birthday boy’s name, the name of the current month, or whatever else comes to mind (try supercalifragilisticexpialidocious for an extra challenge!).