by Jennifer Sellers
Prev NEXT
4 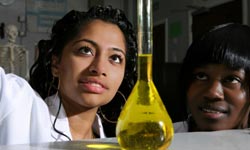 Many kids don't know whether or not they like science because it's never been presented in an interesting fashion.
iStockphoto/Thinkstock

Some kids are just science nerds -- they look at bugs under magnifying glasses, ask Santa for chemistry sets and frequent the Discovery Kids site and channel. But some children may not know they like science because it's never been presented to them in a way they found interesting. Maybe that's one reason why the United States has been ranked only 17th in student science performance by the Organization for Economic Cooperation and Development.

A program called Mad Science lets students participate in scientific experiments of their own, while exploring exciting subjects like rocketry. Such projects may help kids catch up in science by appealing to youngsters' inquisitive sides.

Meanwhile, the U.S. Department of Health and Human Services' after-school division, afterschool.gov, recommends several NASA curriculums. That's the great thing about science programs: The possibilities are limitless. So if one kid has more interest in the solar system than a frog's digestive system, there's a program for him or her.

Science isn't the only thing kids like to explore. Keep reading for our next idea.