How to Plan a Madrigal Dinner

Browse the article How to Plan a Madrigal Dinner 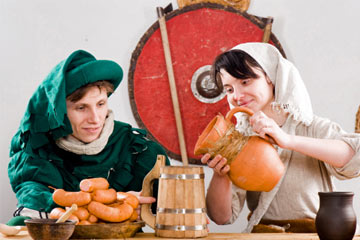 Madrigal dinners follow the tradition of parties hosted by the ruling classes in Europe during the Middle Ages.
iStockphoto/Thinkstock

What do you get when you combine some wenches, royalty, jesters, Christ-child stories and several courses of food and drink? About half of the action packed into a madrigal dinner. Add some drama, comedy (often of the bawdy, innuendo type) and a steady stream of string-laden Renaissance music and you have a celebration for the season, the Christmas season, that is.

Madrigal dinners follow the tradition of parties hosted by the ruling classes in Europe during the 14th through 17th centuries. They were historically sumptuous feasts centered on the 12 days of Christmas and included a combination of religious homage and worldly delight all at the same time. Re-creations of these dinners in the 21st century are widespread across the United States, but many single out a theme of the feasts of olde by focusing on the humor, drama, music or religious aspect without covering all of the elements at the same time.

While a madrigal itself is a musical performance, a madrigal dinner always includes a combination of at least entertainment and food. Many schools, churches and community organizations host this seasonal event as a way to raise money for a cause or program, and they budget the festivities in part through volunteers or student participation built into class work.

Many madrigal dinners become annual events that have lasted decades and sell out on word-of-mouth alone. Planning a madrigal dinner for the first time may involve some advertising, but creating buzz about an eat-drink-and-be-merry-party-performance that the audience even gets to be a part of is probably not going to be too challenging.

Hosting a madrigal dinner centered on the religious themes of Christmas will be different than staging one where music or comedy are central. Whether in a church basement, banquet space, school dining hall or civic center, though, creating an atmosphere for the food and action is about the same.

Décor can include any or all of the following:

If putting on a full stage play or masked drama, or masque, set designs of castle walls, outdoor scenes or inner chambers can be built up for the performance or borrowed from a drama department at a local school. Many churches will have nativity costumes or sets adaptable for telling the Christmas story within a madrigal dinner, and party rental companies or stores can be sources for tableware. Borrowing large bowls or goblets from caterers or even individuals planning the dinner is an option for saving on the dinner portion of the sets.

A very traditional item for a madrigal dinner is wassail. Served hot or warm, wassail is a mead, or mulled liquor. Recipes for wassail involve heating and thickening wine, whiskey or even ale into a more concentrated drink or simmering non-alcoholic juices until they're thicker, sweeter or more pungent. 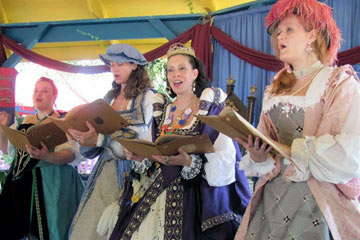 Entertainment plays a big part in any madrigal dinner, and singing, comedy and drama are all common.
Photo by and courtesy of Melinda Ellington.

After deciding on how many or what kinds of elements you want to include in your madrigal dinner, you can choose the scripts, directors, actors and musicians. Most choir or band directors can adapt music for the event and train wandering mistrals to thread music through the audience as part of the atmosphere, but drama and comedy may require buying a script or writing one specific for the dinner. Some theatrical companies offer a number of madrigal dinner scripts with dramatic, comic and religious themes, and many are available online. If leading a creative bunch of volunteers, it may be easy and fun to draw up an original script or plan for improvising the event with actors moving in and out of the audience throughout the dinner.

Court jesters often serve as hosts to keep the re-creation moving from pre-show to dinner and after-dinner entertainment, and other performers such as jugglers or roving musicians can mingle through the feast, too.

Music may include traditional holiday songs or madrigals from the 16th and 17th centuries. Some traditional choices are "Wassail Song," "Silent Night" and the "Twelve Days of Christmas," but dozens of others would work well. Instruments like the flute, harpsichord, violin, oboe, mandolin and harp, and singing either a cappella or with musical accompaniment, are true to the original dinners.

Dramatic entertainment might include a longer or more elaborately staged play or a number of short pieces, or vignettes, scattered throughout the dinner and with some audience give and take. Comedy is another option, and an emphasis on bawdy or teasing jokes and play-acting lends itself naturally to the Renaissance setting. 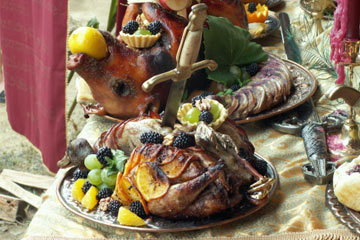 Food takes center stage at a madrigal dinner and can include everything from beef, fowl, stew and cheese to hearty breads, roasted vegetables, and egg dishes like quiche and fritters.
iStockphoto/Thinkstock

Food is the aromatic and mouth-watering element that completes the feast for the senses of a madrigal dinner. Caterers can develop, prepare and serve the courses or volunteers can split up the recipes and re-create traditional dishes in kitchens near the entertainment. Some menu ideas include:

Madrigal dinners can vary from two courses to seven or more and you can serve them banquet style on long tables, or one course at a time delivered by servers who act and speak in a manner that suits the Renaissance mood. How many servers to hire or to round up as volunteers can depend on the number of guests, how much was charged for tickets ($25 to $60 or more is common) and your budget.

Some madrigal dinners keep the silverware to a minimum and encourage eating with your hands as was common during the original dinners, so you might even save on silverware.