How to Host a Murder Mystery Party

Browse the article How to Host a Murder Mystery Party 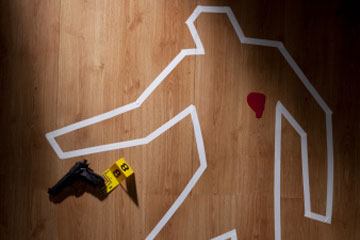 Which one of your lovely guests is the "killer"?
Vincent Besnault/The Image Bank/Getty Images

Your guests arrive to your party to find out some alarming news: A "murder" has been committed. Instead of dialing 911 or running from the premises screaming, they try to figure out who committed the "crime." Was it Nancy, who's wearing a blond wig and false eyelashes? Was it her date Joe, who's scratching his fake mustache and a walking with a cane? So many questions. And it's all up to you and your friends-in-costumes to solve the mystery ... while munching on finger foods and drinking delicious beverages.

Welcome to a murder mystery party, an interactive party game in which someone is killed and everyone else has to figure out who did it. There are many ways this kind of party can play out. Guests may arrive costumed and in character, or not. Sometimes the game involves playing cards over dinner; sometimes it involves scripts and hired actors; sometimes the whole thing is almost completely improvised. Your party can last an hour or two, or it can last an entire weekend. As host, you can participate and have someone else direct, or you can be the director. It all depends on the crowd you've invited, and the kind of party you'd like to have.

A murder mystery party works best with a minimum of about 10 people and a maximum of around 30. There are games for adults, for teens and for kids. The easiest thing to do is to order a box set game or download one from the Internet, which will include all the instructions you'll need. You, as the facilitator of the game, will receive:

To make sure everything runs smoothly at the party, you'll need to prepare your guests properly ahead of time. In advance of the party, each guest will be assigned a character and sent a dossier of sorts -- a background of the characters, the pretend locale (aboard a ship, perhaps?) and the crime. Each guest also receives a booklet describing her particular character, including her background, goals, objectives and special abilities (and, of course, whether she's the murderer). If you're going the costume route (and we advise you do!), this information will help your guests put together their outfits. The guests also receive any special items they might need to play their characters.

When your guests arrive to the party, provide them with notebooks and pens, so they can jot down clues as the game progresses. Most games will come with itineraries, so the facilitator (you or someone else you've selected to be the facilitator) can make sure the group sticks to a time schedule and that the game moves along at a nice pace. At the end of the game, you'll collect your guests' solution sheets before revealing the killer, and see which one of your friends was the best sleuth!

Take your guests' personalities into account when assigning their characters. For example, don't assign the role of a boisterous loudmouth to the shyest person in the room. And alternatively, you don't want to assign the role of a wallflower to your most outgoing guest, either. If you have important roles you don't think anyone can handle, look into hiring some local actors. They'll add some color and fun, as well as help get the whole party rolling.

Setting the Scene for "Murder"

A murder mystery party can take place in one large room, throughout an entire house, in a backyard, or in a rented space -- the possibilities are endless. No matter where you host it, the most important thing is to decorate the space to look like the pretend locale of the "murder" -- a casino, Old Hollywood, a cruise ship, etc., etc. Here are some examples of game themes and settings [source: Murder Mystery Party Games]:

You can also find games suited for various holidays, games set in certain time periods, like the roaring '20s or the Victorian Age, and games for women only.

But what if you don't have the room to throw a huge party? No worries. Try a more intimate affair with a murder mystery dinner party!

Murder Mystery dinner party games are played where you'd expect -- around the dinner table. With this type of party, your guests will receive a dossier in advance and are still welcome to dress up as their characters, but the game will be a little more low-key. Like a party game, dinner games are themed to take place in a certain locale, which means you get be creative with your menu -- make sure your dishes match up with the theme. Don't forget about music -- a playlist that reflects the location where or the time period when the "crime" too place.

Murder mystery dinner party games work a lot like a murder mystery party, except that guests don't move around; you play the game over dinner. Guests wear name tags and are given dossiers and cards describing their characters and motives. Sometimes these games come with scripts that the guests read out loud around the table. But often games aren't that strict -- even though they're facilitated, the guests can improvise, which can lead to more entertaining interactions and fun for everyone. Some games even include weapon cards and fake money, so deals and blackmail can go down among the participants. Of course, this all goes according to the storyline, which the host facilitates.

A dinner party game can last through several courses, and you and your guests may linger over coffee and dessert until the murder is solved. Most games usually take about two to three hours to work through. Once the killer is revealed, have the guests take turns reading their character's descriptions -- you might be surprised to find out what your friends were hiding!

It's also nice to have small prizes or gift certificates for the end of the night for "Best Performance," "Best Costume," "Best Sleuth," or any other silly categories you can think of.

Plan at least two weeks in advance. Ensure your guests RSVP. What good is the game if the murderer doesn't show up? Keep the food themed, but simple. You will have enough to worry about as a host and player without having to spend the entire night in the kitchen. You can even do potluck if it makes things easier. Plan some themed cocktails or drinks in advance as well.