How to Host a Bourbon Tasting Party

Browse the article How to Host a Bourbon Tasting Party 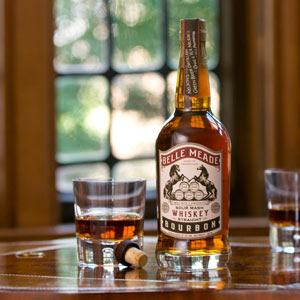 Definitely include a few small batch bourbons, like this one from Belle Meade, which is a family-owned distillery in Tennessee.
Photo courtesy Belle Meade Bourbon

Let's face it: Bourbon has a bit of a redneck reputation. Otherwise known as American whiskey, it's our only true native spirit -- and it carries with it a lot of stereotypes about the South. So, if you invite people to a bourbon tasting party, they might be excused for envisioning hillbilly moonshiners and ladies in big hats drinking mint juleps at the Kentucky Derby. It's all part of bourbon's charm, but it's pretty off the mark. There's an art to bourbon tasting, believe it or not.

Liquor lovers have been fans of bourbon for years, but the general public just now seems to be catching on. Bourbon has been going through a bit of a renaissance lately, with sales of small-batch and single barrel bourbons exploding. These high-end products have helped bourbon gain respect among the general public, and they're probably what you'll want to focus on for your tasting.

Your party guests might expect to slug their bourbon out of shot glasses or drown it in gallons of Coke, but that's not how your tasting is going to go down. Read on to find out how to host a proper bourbon tasting party.

When you're selecting bourbons for your tasting party, the first thing you should consider is your audience. If you're hosting a group of bourbon experts, you might choose a very narrow range of products: only single-barrel bourbons, for example, or bottles from a certain county. That way, you can get very specific in your tasting comparisons.

Most groups, though, would probably appreciate a more diverse experience. So, mix it up a little and keep people guessing. Select maybe between five and 10 bottles to give a good variety. Taste midrange bottles from a big name (Jack Daniels, Jim Beam) next to high-end, small-batch bourbons from boutique distilleries. Just for fun, throw in a bottle of rotgut -- the cheapest bourbon you can find -- and see if anyone can tell the difference.

The best kind of glass for bourbon tasting is small, stemmed and tulip-shaped -- like a brandy snifter or sherry glass. They allow for the full release of the bourbon's flavors and aromas. Whatever you do, don't use a straight-sided glass because, apparently, it will let the aromas and flavors escape so you won't experience the true taste. Who knew? And oh, each taste should be about an ounce.

So ... you have a tiny glass of bourbon in front of you. Do you sniff it first or just take a slug?

Best of the Batch

Traditionally, whiskey from many different barrels is mixed together at the distillery in a process called "mingling." So, any given bottle from that distillery can include bourbon from 200 or more barrels. Small-batch bourbons are bottled from a blend of about 20 barrels. And single-barrel bourbons -- as the name suggests -- are bottled from only one barrel.

The Art of Tasting Bourbon

You might think that a bourbon tasting party would be a more casual, less pretentious version of a wine tasting, with all of its swirling, sniffing and sipping. And you might be right on some counts -- you probably couldn't get away with a redneck theme or serve barbecue at a wine tasting. But there are rules to bourbon tasting, and following them will really bring out the best in the bourbon.

Don't worry about not having perfect form as you get the hang of these tasting techniques -- it's a learning experience for everyone. Above all, have fun with it!

By law, bourbon must be made in the United States, contain between 40 percent and 80 percent alcohol (80 and 160 proof), be distilled from at least 51 percent corn and aged in charred oak barrels for at least two years. It does not, as many think, have to be made in Kentucky (although most of it is).

Food at a Bourbon Tasting Party

There's no need to serve a full meal at your tasting -- the bourbon should be front-and-center, and you shouldn't overshadow it with a lot of food. But your guests can't be expected to survive on bourbon alone, so go ahead and dish up a few hors d'oeuvres.

Southern food is a no-brainer to pair with the ultimate Southern whiskey, and we don't see any reason to stray from the obvious. But you should pay attention to the specific flavors that will bring out the best in the bourbons you're serving. You can't just set out any old barbecue platter and call it a day. You need bold flavors -- and the more aged and higher-proof the bourbon, the bolder the food should be.

Many types of bourbon have an oaky taste with notes of caramel, so you can either try to match those flavors or cut through them. Fresh fruits, salt and smoke will go against the flavors in the bourbon -- salted, cured meats like bacon and country ham always work and you can't go wrong with aged and smoked cheeses. If you want to work with the bourbon, try caramelized pecans, dark chocolate or peach cobbler for dessert.

Check out the next page for more information on bourbon.

Your guests probably won't be feeling all that sober as the evening winds down, so it's your duty to make sure everyone gets home safely. Have car-service phone numbers handy, and never let tipsy people drive.