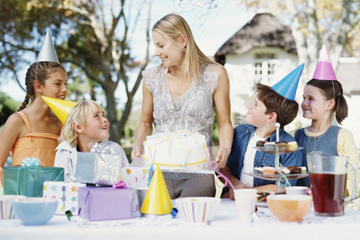 As parents, you want your child to have fun but also be on his or her best behavior.
George Doyle/Thinkstock

Before the teenage excitement of homecomings, proms and first dates, there's the exultant joy and anticipation of birthday parties. For kids, birthdays are like mini-holidays, complete with games, presents and sweet confections. Having one thrown in their honor or being invited to a friend's is often a special highlight of the year.

But combining a group of excited kids and sugar can be disastrous. The birthday child may scoff at a present, causing a guest to cry. A high-strung tyke may ruin game time for everyone by not following the rules. Sulky Sams and Sallys can drag down the attitudes of the entire group.

As parents, you want your child to have fun but also be on his or her best behavior. The birthday kid must set a good example for the invitees, and the guests must respect other parents' rules. Therefore, before attending a birthday party, parents should sit down with kids and remind them about basic party etiquette, detailed in the following five principles.

One of the first questions that pops into parents' minds when planning their sons' and daughters' birthday parties is whether they're obligated to invite the whole school class. For younger children, it may seem like a polite gesture, but hosting 25 boys and girls may simply prove too much to handle. Etiquette experts agree that inviting the entire class isn't necessary, but children must be discreet in that situation. Handing out invitations at school, for instance, isn't a good idea, since kids who weren't invited might notice.

When pulling together a guest list with children, stress the importance of not talking about the birthday party in class. Either send the invitations in the mail or hand them to parents directly. Older kids may be able to phone their friends and invite them over, but they should still be polite and not discuss it around other people.

Before you drop off children at a birthday party, they must be prepared to follow the rules at the friend's house. Explain that even though the party is happening elsewhere, they should act as though they're at home with mom and dad. Encourage children to listen to the other parents, since that will help the birthday friend have an even better time.

On the flip side, birthday kids must also follow the rules. Amid all the excitement of friends coming over for the afternoon, it can be tempting to show off or act out. But talk to the birthday boy or girl beforehand and discuss the importance of setting a good example. That way, friends will have more fun and want to come back over again.

Complaining at a party is an instant fun killer. Young birthday attendees may get upset for any number of reasons, such as jealousy over a present, food selection or a sugar crash. Along with following the rules, guests must also understand that complaining isn't allowed. For example, boys and girls must be ready to either eat the snacks and cake that are offered to them or know how to politely decline. Explain that the party is being thrown for their friend, and they'll have a chance for their own celebration when their birthday rolls around.

Likewise, the birthday kids should also keep complaining to a minimum. A simple way to prevent this is to include them in the planning process. Once they get old enough, boys and girls can help select their own party theme, activities, guest list and so on. If they express discontent that something isn't going their way during the party, urge them to keep a positive attitude.

An inevitable issue that arises with kids' birthday parties is the question of whether family is invited. Should parents come along, or drop the kids off? Furthermore, are siblings ever invited by default? First and foremost, parents should assume that siblings aren't implicitly invited, especially older ones. And no matter what, parents should clarify with the host family that a sibling will attend.

If siblings over the age of three tag along, they should be aware that they may not be able to participate in all of the activities. Host parents will likely try to accommodate siblings, but some things may not be age-appropriate. For instance, older brothers and sisters probably shouldn't join in competitive games since they'll have an unfair advantage. At the same time, younger children may hold up the activities if they aren't on an equal skill level. Consequently, parents should tote along some discreet alternative options (coloring books, handheld video games, etc.) to keep any siblings entertained.

These days, parents fret about whether kids should open presents at birthday parties. Some fear that it promotes materialism and greed, and others wish to avoid the awkwardness of a child sneering at a gift. Whether present time happens at or after a party, birthdays are a prime opportunity to teach the value of gratitude.

If opening presents in front of friends, birthday boys and girls must be ready to say thank you for whatever is inside the wrapping paper. Even if they don't like it or already have it, they should refrain from saying anything negative. When penning thank-you notes to attendees, involve the birthday kids as well. That instills the value of expressing thanks and demonstrates proper post-party etiquette.

Remind birthday party guests to thank their host friends and parents on their way out the door as well. Teach children to practice gratitude at an early age, and they'll reap the benefits for many birthdays to come.