Browse the article 5 Fun Ideas for Hosting a Guys Night

Get the guys together for an epic night -- no girls allowed.
Polka Dot/Thinkstock

Once you finish tricking out the man cave, a boy bash is inevitable. You've got that big, bold sound blasting out of the home theater system, a flat screen with more square footage than your backyard, and so many remote controlled devices you don't know how to turn the lights off. Now, you're just about ready to host guys' night in.

This should give you a clue that entertaining a group of guys is different from entertaining girls or a sedate short list of couples. Let's say there's a paradigm shift from refined merriment to belly scraping guffaws, passionate arm flailing, the potential threat of occasional flatulence -- and beer -- lots of beer. Once their suits come off in favor of well-worn jeans and ripped tees, boys will be boys.

It might not be quite that primitive, but you can definitely leave the good napkins nestled in their drawer and approach party planning with an eye toward finger foods, fast action entertainment and comfortable surroundings that can take some spills and general abuse. In fact, if you just tossed out rolls of paper towels with the refreshments, you'd get some laughs and knowing nods. It's that kind of a get together.

Poker night is fast becoming the great American pastime for grownups. With the burgeoning popularity of online poker, celebrity poker and televised poker tournaments broadcast from locales like Las Vegas and Hawaii, card play is big business and lots of fun. When guys play en masse, it's more than polite entertainment, though. Men take their card games pretty seriously, and there's nothing pretty about it. That includes a heaping pile of testosterone laden "competitive spirit."

For guys, playing poker is as much an exercise in technique as it is about competition. You can see it in the way they wager and watch one another. It's about discovering other players' tells, those involuntary twitches and mannerisms that give their strategies away, but it's also about that indefinable essence of male bonding and masculine style that women just don't get.

Because guys' night poker is serious business, keep the distractions to a minimum. That translates to putting the kids to bed early and keeping the family dog out of harm's way until lights out. It's also a good idea to offer plenty of liquid refreshment and a few snacks that are easy to eat one-handed. We love dedicated poker tables with all the decorator froufrou, but if all you have around is a portable card table (and cards, of course), you're still good to go. Comfortable seating and efficient lighting are also important. Oh, and having poker chips on hand to avoid hassles with cash wagers is a nice touch, too. 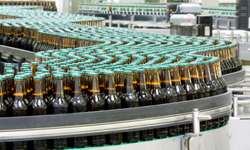 A trip to the local brewery could be fun, too.
iStockphoto/Thinkstock

Guys and beer seem to have a natural affinity for one another. It isn't just having an excuse to belch extravagantly, either. Beer goes with many of the fatty foods men love like pizza, hot wings, potato skins and loaded nachos. Beer has become a designer beverage, too, rivaling wine in its ability to distinguish the connoisseur from the weekend wannabee.

This is good news if you're planning a beer-based evening. Guys will often have a preferred beer but still be open to trying new things, especially if there are some tasty munchies on hand. Even better, sample packs of seasonal beers are popular right now, and many come from manufacturers you know and trust. Having an assortment on hand is a way to introduce new favorites. Beer flavored with orange peel or cinnamon might not sound enticing, but bold, spiced and unusual brews can be surprisingly satisfying. Here are some other useful suggestions:

One last observation: Beer tastings are supposed to be fun and genial throughout. There's no right or wrong opinion. That's why there are so many beers around to choose from.

If your guy prefers a joystick to a hockey stick for his sport of choice, he probably has a video game favorite -- and competitive friendships -- that will make this a fun evening. Since the electronics are what makes this type of entertainment work, all that's lacking is the refreshments. Keeping the snacks dripless and easy to handle is a smart idea -- especially if you love your carpeting. Think of it as cocktail party fare without the shmoozing.

If your guy and his bromance buddies aren't into video games (hard to imagine, but still possible), there may be other activities they can share. Board games like chess lend themselves to meditative partying. Sure, getting the guys together to discuss chess strategy, woodworking or classic car restoration may not fit the cliché, but you love him for his quirky side too, right?

Ask the participants for their beverage preferences beforehand, and stock up on what they like to drink. Even if you don't know a carburetor from a curling iron (or a bishop from a castle), you can still make sure the guys are comfy while they're doing what they enjoy. 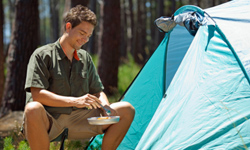 Men fit right in in the great outdoors!
Polka Dot/Thinkstock

Ah, this is a brilliant idea that will fit the bill if you've had guy night at your house before and hated the noise and messy cleanup. If overflowing wastepaper baskets and the lingering aroma of brats and cheese make you cringe, move guy night outside. This is also a great idea if you have young children at home or your guy has a few leftover bad habits -- and raucous single friends -- from his college days. Public and private campgrounds are nestled everywhere, and there may be one or two near your house.

The local raccoon population won't mind an occasional thunderous guy-belch or indecent foray into creative profanity. These days camping can be pretty comfortable. With site side electricity, clean restrooms, modern showers and few noise restrictions, your fella and his ravening horde -- that would be his dear friends once they get hungry -- can really let loose. There can be fire, too. Guys love a big bonfire in the old camp side fire pit. It's almost as good as television.

If a pizza hits the dirt pepperoni side down, no problem. If the guys over indulge, getting home safe won't be an issue, either. And if the cigar smoke gets so thick it looks like a fog front moving in, it's the ranger's problem, not yours.

When the weather's good, this is so doable. You can even pick up a couple of deeply discounted tents during the off season. Camping tents are wonders of modern engineering: They go up fast, knock down faster and only take up a small footprint in your garage. A portable grill, sleeping bags, some lightweight lawn chairs, a couple of coolers and a big bag of ice will approximate all the other comforts of home.

If your guy's a football, basketball, baseball, car racing, horse racing, hockey -- insert your guy's sport of choice here -- fan, game night is a big, big deal. It could be the culmination of an entire season of couch potato calisthenics. You know what that is, right? It's the exercise required to readjust the couch cushions and reach the remote in order to channel surf during commercial breaks.

One nice thing about making sports night a guy occasion is that it will get your fella into entertainer mode. He may actually remove some of those old take-out containers from the fridge and empty the wastepaper baskets in the man cave, game room or den. We love game night. It has drama, strategy, backstory and heart. You get to experience many of the great things about competitive sport without the burn or the medical bills.

To throw a great party -- you guessed it -- food and beverages figure prominently. Finding the sweet spot is important, too. That's the viewing area in front of your flat screen that has the best picture quality. This may require moving the furniture around a little. Another nice touch is to print out a listing of stats, facts and figures for the current gaming season as well as a schedule of future televised events. If the guys get bored during halftime or want to check on future matchups, they'll have the information at their fingertips.