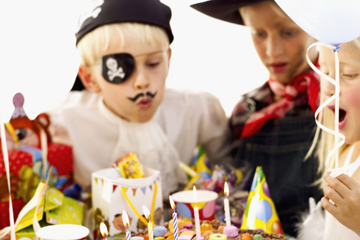 Clowns don't cut it when your boys get older.
Stockbyte/Thinkstock

Long gone are the days of cake, ice cream and a clown skilled in twisting balloons into animals. A fun themed birthday party is the way to go. Get some input from your birthday boy (no matter what his age), gather your decorations, bake or order that sugar-laden cake and you're on the way to throwing this year's most memorable birthday bash.

An active, sports-themed birthday party -- whether it's bowling, skating, paintball or miniature golf -- makes managing a large group party easy. Book time at a local sporting club, rink or court, bring some food and music, and game on!

Of course, keep safety in mind. Make sure there will be a lifeguard or referee on hand and all kids' parents are comfortable with the planned activities. For younger kids, set up the Olympics in your yard or a local park and include events such as jump rope and relay races.

Watching from the sidelines can be a blast, too. Instead of playing a game, get tickets to one! Minor league or local games are always a good bet and won't break the bank, either. Just don't forget to budget for hotdogs or popcorn.

Make the party even more fun by allowing guests to arrive dressed in themed attire!

Throwing a party for a teenager? Stage a scavenger hunt in your yard, your neighborhood, at the mall or at a local park. Create a list of items that must be found -- if you're playing in a park, you'll probably also need to hide items to be scavenged -- usually about a dozen or so is the sweet spot. Break the group into pairs or small teams, give them the list, a timeframe and anything they'll need to get the job done (such as a digital camera) and set them free.

This idea works for the young kids too, if you scale back the idea. Consider a search party or a game of detective around the backyard.

Kick off a pirate party with fun invitations: think treasure map with a red X over the party location or send a message in a bottle. Decorate with black and red, rope, wooden crates and a pirate's chest filled with stolen treasure (toy jewelry and gold foil-covered chocolate coins), and don't forget the board for walking the plank.

Greet your mateys with eye patches and bandanas to tie around their heads -- maybe smear a little kohl around their eyes to give them that Captain Jack Sparrow look. Then let the looting and plundering begin!

You don't need to go to Africa for this safari party!

A little mosquito netting, binoculars, stuffed animals and lot of foliage (real or paper) as decoration and you're on your way to creating a safari in your backyard or in your living room. For added ambiance, download some jungle noises to play in the background.

On the invitation, request that guests come dressed as an explorer (in Khaki) or a favorite animal (or in animal print), or watch your own lions and zebras come to life by making face painting part of the party scene. They can even contribute to the scene by bringing their own favorite stuffed animal to add a personal touch.

If you'd rather get out of the house or have a group of smaller kids, consider the local zoo as an alternative.

We're not talking about charades here. Game night birthday parties can work for many different age groups, with younger kids playing age-appropriate games like tag or Candy Land and teens hedging their bets on the "blackjack table."

Small parties make it easy for everyone to play together in games such as Trivial Pursuit, Cranium or Scene It? (good for adults, teens and kids -- and it comes in themes such as Disney, James Bond and Harry Potter).

For a little more action, make it a Wii party, complete with bow-offs and tennis matches, or a full-on Rock Band concert.

For bigger crowds, set up gaming stations or put together a casino night with dealers, gamblers and poker chips.