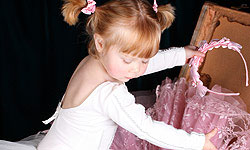 There's just something about tutus and tiaras that makes every little girl, from toddlers to pre-tweens, twinkle with delight.
Thinkstock

If you have a daughter, you probably know this already -- but just in case you don't, here's a glimpse into your future. At some point in your little girl's life, it's inevitable: She's going to want a ballerina birthday party. That's just the way it is. No matter how you might shy away from all things frou-frou, your daughter is probably drawn to tutus and bows like a moth to a flame, and there's not much you can do about it. So -- for one day, at least -- why not embrace it? Go ahead and throw her the frilliest, pinkest birthday party imaginable.

One warning, though -- if you want (or need) to make this party an all-inclusive, coed event, the ballerina theme is probably not for you. We hate to gender stereotype here, but if there's one kind of party that has to be totally girly, it's a ballerina party. You could give the boys leotards and tights, but somehow we suspect that wouldn't go over very well.

So how do you make your ballerina party stand out from the pack? We've come up with five ideas that will help your birthday girl be the prima ballerina.