Browse the article 10 Ideas for a Unique Birthday Party 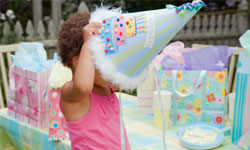 Is there a smile hiding behind that party hat?
Jack Hollingsworth/Thinkstock

Your kid's birthday is coming up, and you're fresh out of savvy ideas. Sure, you could just invite over a bunch of children to run around in the backyard like every other parent does, but you want something cool and unique to make your little one feel special.

It's your lucky day! We're sharing some extremely fun, chic children's birthday party ideas that will make your kid's b-day bash legendary among his or her friends. We'll tell you what treats can bake up a one-of-a-kind celebration for your daughter and how Godzilla can play a destructive but welcome role in your son's birthday bash.

What do beach toys, a sandbox and your child's love of dinosaurs have to do with a birthday party? Find out on the next page.

Does your kid freak out over fossils? Make your budding paleontologist's birthday wishes come true by organizing a dinosaur hunt for him and his friends! Send kids on a mini excavation in the backyard. Simply fill plastic Easter eggs with small dino toys or wrapped candy, and hide them in a large sandbox. Give your boy and his party guests plastic beach shovels, buckets and whatever else you think they'll need for their archaeological excursion, and just let them dig.

You might not assume that kids would enjoy sifting through a sandbox, but when dinosaurs are involved, they'll tear into the task with T-rex-sized enthusiasm. Stick with a dino-themed cake and decorations to keep the excitement going, and let guests take home the unearthed toys and candy as party favors. Your kid will likely remember this afternoon as the best birthday bash of the era. 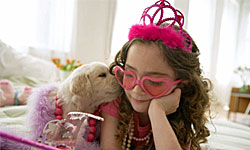 The birthday girl will have much more fun with her fuzzy buddy in tow.
Chris Amaral/Thinkstock

If your kid is wild about animals, let her woof it up with a pet party! Send out animal-themed invites to her friends and their pets, then wait for the fun and fur to fly. If your little animal lover is inviting her entire class, you can set stricter regulations on the beasts of honor, such as dogs only, and plan to have the party in a large, animal-friendly environment like a dog park or, if you've got the space, your own backyard.

Is your child is inviting a smaller, more manageable group? In that case, you've got some wiggle room to invite anything that mews, barks or blows bubbles. Allow creatures of all types to attend, from fish and ferrets to felines. Section off an area of your home, but beware of guests with long-standing instinctual feuds. You'd be surprised how much chaos a few fleeing cats and one determined dog can cause, so make sure all furry party attendees undergo a temperament test before they're admitted. Mandating that everyone's up to date with vaccinations isn't a bad idea, either, and be sure all parents understand the party's theme so children with pet allergies will know to decline the invite.

The movie theater is a magical place for children. A huge, towering screen engulfs their field of vision, and the resounding thuds, cracks and booms from the speakers dominate their auditory senses. It can be overwhelming (and for the younger set, even a little scary), but a good cinematic experience can take a child on a journey that adults haven't been on since, well, they were kids themselves.

Now, we know what you're thinking: A lot of kids' parties take place in movie theaters. We'll grant you that, but not many kids get the entire theater to themselves. What's more, some theaters will allow you to view an older film that's no longer playing in theaters. Yes, it'll cost a bit (or a lot) more, but the experience will be richer, fuller and more magical without the screaming babies, vibrating cell phones and hushed chatter that takes place inside most modern screenings.

Also, if you're willing to pay for it, many theaters will run a special birthday message to your child on the big screen before the previews start. And really, what's cooler than cutting your cake and opening presents in a movie theater? Nothing.

Depending on where you live and the size and quality of the space, you can expect to pay anywhere from a few hundred dollars to more than $1,000 to rent out a theater. Most theater rentals cost between $300 and $600, however. 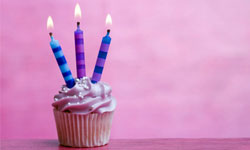 If there are two things girls love, they're sweets and sleepovers. Why not combine the two into a decadent, all-night birthday bash your daughter will remember for years to come? Yes, you're going to have a huge mess to clean up afterward, but throwing her a cupcake party will be easy.

Instead of spending money on props and a party space, blow it all on candy and confections! Purchase lots of different flavorings, sugars, toppings, icings and, of course, eggs, butter and flour. If you really want to go all out, you can pick up personalized aprons for party favors. Your daughter and her baking crew will remember this event long after their sugar highs are over.

It doesn't matter if you're raising the next Jacques Cousteau or your child doesn't know the difference between a snail and a squid -- a birthday party at an aquarium is a guaranteed great time. Children love aquariums because sea life is pretty weird. There's nothing on Earth quite like a sea horse but a sea horse, and unless your little one is a proficient scuba diver, there's nowhere else he can get so close to the strange, exotic creatures of the deep.

Best of all, you won't have to deep-six your bank account to finance your child's undersea extravaganza. Many aquariums have special party rooms, and if you're having an especially large gathering, some venues, such as the Georgia Aquarium in Atlanta, have large areas available that include unique views of an exhibit. You can also request a special behind-the-scenes tour, and if you ask nicely (and pay more), divers may be persuaded to hold up a "Happy Birthday" sign during a feeding!

Sea horses look funny, but it's their biology, not their appearance, that makes them the most unusual fish in the sea. Sea horses mate for life (a rarity among fish), and it's the dads, not the moms, who carry and birth the young.

Choosing a special guest to appear at your child's birthday party isn't an easy task. Mickey Mouse, Sponge Bob Squarepants and Elmo are all fine, but what do you do if your kid has outgrown Barney and favors a more destructive giant lizard? Invite Godzilla!

Nothing will make your child smile more than seeing a fully suited monster laying waste to cardboard cities on his birthday. Make the event a costume party and ask the guests to come dressed as their favorite superhero or villain for a monstrous good time.

Fair warning: Some kids might be a little frightened by monsters, so make sure everyone knows that a potentially scary surprise guest might stop by, and encourage the guests' parents to hang around so all the kids feel safe.

He may be known in the United States as Godzilla, but in Japan, the monster still goes by his original name, Gorija. The title is a combination gorira and kujira, the Japanese words for "gorilla" and "whale," respectively.

If your child loves the museum, plan a birthday party among the artifacts. Programs and options vary, but many facilities have dedicated, party-ready rooms and special tours available.

Museums' b-day packages typically include food and drink, but you can always celebrate before or after the event with a cake decorated to look like your child's favorite exhibit, such as a mummy's sarcophagus, a T-rex's skull or a towering Egyptian pyramid.

The Smithsonian offers sleepover packages where kids (and adults) are treated to a special after-dark tour, IMAX movie, scavenger hunt and the joy of sleeping underneath a scale model of a North Atlantic right whale, one of the largest and most endangered creatures on the planet. 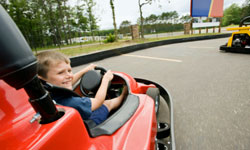 He may not be old enough to drive yet, but that's no reason why your child and his friends can't get behind the wheel on his birthday. Go-kart racetracks are fairly common and can be found everywhere from theme parks to independent locations. Even some miniature golf courses have go-karts, so it should be easy to find a fun, age-friendly venue that everyone, including parents, can enjoy. Plus, since all party attendees will actually be racing, it's one of the most engaging and crowd-pleasing birthday party activities on this list.

It's important to remember that we're talking about go-karts, not bumper cars. Go-karts are actual gas-powered vehicles that race around a track. Bumper cars are electric shells that slam into one another. Bumping cars is fun, but the novelty won't last for an entire afternoon. Choose the option that's most engaging to (and age-appropriate for) your child.

Online competition is great, but as any gamer who grew up in the 8- and 16-bit era can tell you there's nothing like fragging your friends when you're all in the same room. It adds a much more personal and enjoyable element to any pixilated contest.

If your little gamer enjoys the thrill of Xbox Live races, kid-friendly fighting games, platforming or even deathmatches, cater to his competitive (or cooperative) nature and love of video games.

It's an underused feature, but two Xbox 360s can be connected to each other via wired system link, and you can actually link between three and 16 consoles together (for up to 64 connected players) if you use a network router or hub.

Regardless of your method of connection, you're going to need a TV and copy of whatever game they're playing for each Xbox. But if you can convince all the party attendees to bring over their consoles (and maybe a small television), you'll be hosting the kind of birthday party that schoolyard legends are made of before you even press start.

If you're a PlayStation household, you can link PS3 consoles together via an Ethernet cable or switch, though it's a bit more complicated than connecting Microsoft's machines. Wii fans will have more trouble catering to a crowd; Wii doesn't support system link. 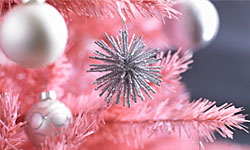 A pink tree with sparkly ornaments is clearly for a birthday, not Christmas.
Ryan McVay/Thinkstock

Santa manages to leave presents under the tree of every child in the world in a single night, so we're pretty sure he'd be more than willing to stop by to celebrate your kid's birthday if you asked, regardless if the party is on the beach or in your living room. You can set up a special birthday tree where all the guests can leave their presents, and everyone can sip on eggnog and hot cocoa instead of soda.

You may assume this idea only works for December babies, as most of us tend to think about Christmas only around the holidays, but Old Saint Nick is preparing year-round. Your child will be elated and surprised by an out-of-season visit from the big man in red. In fact, your kid may be happy enough to give you a quick peck on the cheek in front of his friends, and you won't even have to pull out the mistletoe. 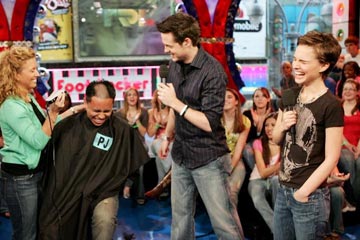