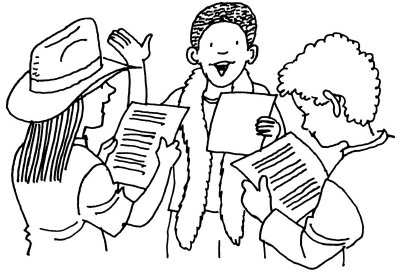 Have a Write a Play Day for a theatre activity where kids can create their own script. Kids who have really been bitten by the drama bug can also put on their own performance. This kids' activity will let drama stars shine!

How to Have Write a Play Day:

Step 1: Make up four important or interesting characters. They could be rock stars or scientists, police detectives or circus clowns. What do they look like? Where are they from? Write it down.

Step 2: Now imagine what might happen to your characters. How did they meet? What do they do when they get in trouble? How do they get out of the fix? Write down everything you imagine they would say.

Step 3: Get three friends to help read the finished script.

Next, a theatre activity that creates rolling waves to use as a backdrop.