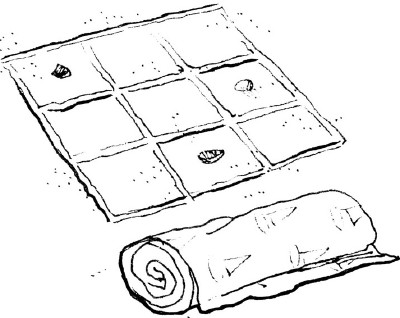 Play the Sand Memory Game.
None

The Sand Memory Game is a great beach game for kids, and all that's required to play it is two people with good memories! That, and a significant amount of sand.

Sit back to back on the sand and draw a grid. Decide ahead of time how big to make your grid. You might start with a grid 16 squares large (four squares per side), then make it bigger as you get better.

Have your friend turn away while you set out rocks on your grid. You can only put one rock on each square, but you don't have to put a rock on every square. Once you've created your rock pattern, cover it with a towel.

Change the rules as you get better at the game. You might allow more than one rock per square. You could use different markers, such as shells, rocks, and twigs, or make bigger grids.

For some more fun activities for kids, check out:

Stay Out of the Tide

Remember when you're near a roaring tide to wear sturdy shoes with non-slip soles. Never turn your back on the ocean, because "sneaker" waves can wash away unwary visitors. And always have an adult with you.