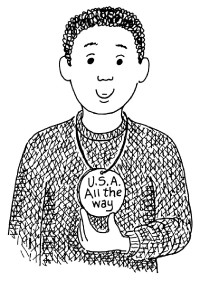 Test your knowledge of the U.S.A. with the Truth or Lies Game.
none

The Truth or Lies Game challenges your friends to a game of trivia about the country.

How much do you and your friends really know about the United States? Play this truth or lies game and find out.

Step 1: The leader of the game must write a list of facts about America. For example: There are 50 states in America. Native Americans were the first people to live in this country. The first president of the U.S. was George Washington.

Step 2: The leader should also write a list of lies about America. For example: France is the name of an American state. Each president has two vice presidents.

Step 3: When the leader has a list of around 20 facts and lies, the game is ready to begin. The leader quickly calls out facts from the lists. It is good if the leader can call out the facts in a kind of rhythm, like a rap.

Step 5: Anyone who claps at the wrong time is out, and the last one left is the leader next time around.

For a different kind of back-to-school activity, see the next page for Mud Madness!