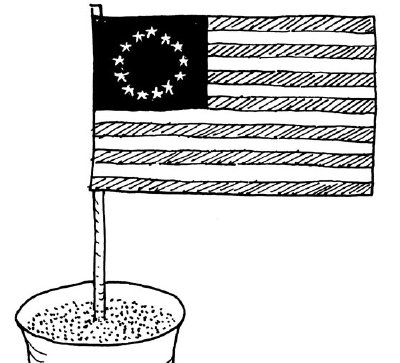 Use many different versions of the American flag in the Progressive Mining Flag Game.
©2007 Publications International, Ltd.

American Flag Crafts and Activities for Kids are an ideal way to bring the family together on the Fourth of July. Teach your kids about the history of the flag, and have a good time doing it.

Whether you're throwing a large party or having a quiet family day at home, these crafts and activities are sure to provide hours of fun on the Fourth of July.

On the following pages, you will find out about crafts and activities that center around the American flag:

Create a fun competition that also teaches kids about the history of the American flag. Learn to make the Progressive Flag Mining Game.

Encourage your kids to express their feelings about freedom through the Free-Form Freedom Rap. Read about how to plan this American Flag activity.

Have your kids create their own Freedom Flag in honor of the Fourth of July. Get directions on how to make this American Flag craft.

The Progressive Flag Mining Game teaches kids about the history of the American Flag while they play a fun, competitive game. Read about this American flag activity on the next page. 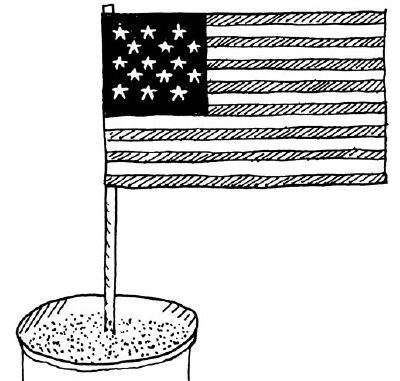 Place the American flag in a bucket of sand.
©2007 Publications International, Ltd.

The Progressive Mining Flag Game is a fun way to teach kids about the American flag's history. Play a unique version of this popular Victorian game. This game requires a steady hand while playing.

How to Make the Progressive Flag Mining Game

Step One: To make the game, fill small containers with sand. These are known as "mines."

Step Two: Cut a 4 x 3-inch square of paper for each of the mines. On each square, draw one of the different stages of the American flag, beginning with the original design, up to our present-day flag.

Step Three: Glue the end of each paper flag to a wooden skewer, and when the glue dries, stick a flag into each of the mines.

Step Four: Cut a little off the end of each straw (one for each player) to make a shovel shape. For every 2 players there must be 1 mine.

Step Five: Players then take turns using the plastic straws to remove a bit of sand and placing it in an empty cup or bowl. Whichever team makes the flag fall while removing sand loses the game.

See who can dig the flag out of the sand the fastest.
©2007 Publications International, Ltd.

Encourage your kids to express how they feel about freedom by performing a Free-Form Freedom Rap. Read about it on the next page.

The Free-Form Freedom Rap encourages your kids to write a rap song to celebrate Freedom. Freedom is something to sing about, so write a rhyming poem and make up your own freedom rap song.

How to Make a Free-Form Freedom Rap

Step One: Brainstorm a list of words and ideas that remind you of freedom and the Fourth of July or June 19, the day that celebrates the Emancipation Proclamation.

Step Two: Then think of words that rhyme with this list. For example, June and moon, free and honeybee, nineteen and keen.

Step Three: Write rhyming sentences that use these words, such as: "One fine June, I saw a beautiful moon. The date was June nineteen, and it sure was keen. Because now I am free, just like the honeybee!"

Step Four: When you finish your rhyme, clap out a rhythm with wooden blocks, and say it like a rap. Teach it to a friend, and make up a dance to go with it!

After your kids make a Freedom Flag, they can wave the flag of freedom high! This flag will look great waving in the Fourth of July parade.

How to Make a Freedom Flag

Step One: To make the flag, glue or staple the short edge of the fabric to a wooden dowel. Leave 2 inches of dowel showing at the top to tie on yarn or ribbon streamers. The rest of the dowel will be your flag's handle.

Step Two: Decorate your flag by cutting the word "Freedom" out of felt or fabric scraps and gluing them onto the canvas. Paint designs around the word with fabric paint. You might want to draw President Lincoln or President Washington on your flag. Think of what the Fourth of July means to you and what pictures you can draw to show your feelings.

Step Three: Then wave your Freedom Flag with pride as you march down the street.