Who is 'tinnovator' Aaron Dunlap? 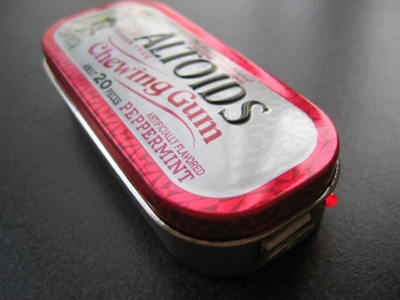 Necessity and an eye for good design led Aaron Dunlap to his first tinnovation -- a battery-powered USB charger made from an Altoids tin. Back in 2005, Dunlap was a college student with a peculiar fear of running out of power for his smartphone. "When my cell phone's battery is anywhere under 90 percent, my heart starts racing and I get on my hands and knees and look for power outlets," he wrote in a 2005 blog post [source: Dunlap]. (There's actually a term for the fear of being out of contact via mobile phone: nomophobia [source: Urban Dictionary].)

One can understand Dunlap's anxiety. He used his smartphone for everything -- including taking notes in class -- but he also disliked toting around bulky wall chargers and searching for outlets. After looking around at electronics retailers, he came to realize that there was nothing available that could provide a backup charge for his electronics devices to his satisfaction. Even more, the do-it-yourself electronics instructions he found available on the Internet concerned making battery-powered chargers for iPods, which use Apple's FireWire interface; he needed a USB charger. Eventually, Dunlap decided to go it alone.

After educating himself on the finer points of amateur electrical engineering and assembling the parts from wholesale electronics suppliers, Dunlap was ready to get started. By this time, he'd decided on an enclosure for his device. "When it came time to build it, there really wasn't any question as to what kind of enclosure to use," he says. "An Altoids tin was just obvious. Not only were they readily available, they also have an indescribable coolness" [source: Dunlap].

Dunlap created his first battery-powered USB charger using the sleek Altoids Peppermint Chewing Gum tin. It's slender and the perfect size for the 9-volt battery, electronic components and USB port arranged within it. It worked. The 9-volt battery provides a portable charge that generates 60 minutes of talk time or four hours of standby for his smartphone [source: Dunlap]. Since he'd had to buy the parts he needed wholesale, Dunlap had plenty left over after he created his charger. He decided to write out instructions and assemble the parts into kits for sale to do-it-yourself electronics enthusiasts.

What happened next is a testament to the power of the Internet and the attraction of the Altoids tin. 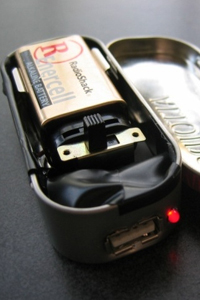 The response to the Altoids tin USB charger was so overwhelming that Aaron Dunlap founded The Electroids Company to fill the orders.
Courtesy Aaron Dunlap

All told, Aaron Dunlap had enough materials left over to create 25 Altoids tin USB charger kits. He put a blog post on his personal Web site describing his invention along with a photo and sat back and waited -- halfheartedly. "I had enough for 25 kits, and thought that if I sold half that many within a few months I'd be lucky," says Dunlap [source: Dunlap]. Instead, he needed to wait only a couple of hours.

Within five hours, the original 25 kits were sold. In addition, requests for more were not only still coming in, but increasing. A few days later, Dunlap's blog post was picked up on the aggregator sites BoingBoing and Digg. Suddenly, his Altoids tin USB charger was famous. Another big boost came a couple months after his post and served as the real tipping point for the Altoids tin USB charger. The print version of Popular Science magazine featured a full-page story on Dunlap's creation. "The already-extraordinary demand for the kits became insane," he says [source: Dunlap]. With requests for his kits coming in faster than ever, he founded a retail site, The Electroids Company, to handle the orders.

While Dunlap's invention is highly functional and fulfills a sorely overlooked niche, the designer acknowledges the role that the Altoids tin has played in his sales. "If I'd chosen to use an off-the-shelf metal project enclosure in the first place, I'm sure I'd still be trying to sell those 25 kits," says Dunlap. "Putting it in an Altoids tin turned a somewhat-interesting electronics project into a cultural phenomenon" [source: Dunlap]. He has evidence to support his hypothesis: Following the success of the Altoids tin USB charger, The Electroids Company began offering a LED flashlight, also enclosed in an Altoids tin. "People went nuts for those too," he points out [source: Dunlap].

With the response to the Altoids tin USB charger (and new LED flashlight) and the ensuing founding of The Electroids Company, Aaron Dunlap has gone from mere tinnovator to tinnovating entrepreneur. It's not a bad success story for a college kid who just wanted to make a cool USB charger for his smartphone.

If you'd like to get your hands on one of Aaron Dunlap's Altoids tinnovation kits, you can click through to The Electroids Company's retail site here.

Aaron Dunlap generously created a discount just for readers of this HowStuffWorks.com article. Type in "howstuff" into the coupon code area when making any purchase at The Electroids Company and receive 20 percent off.