How to Make a Steampunk Altoids Tin

Browse the article How to Make a Steampunk Altoids Tin 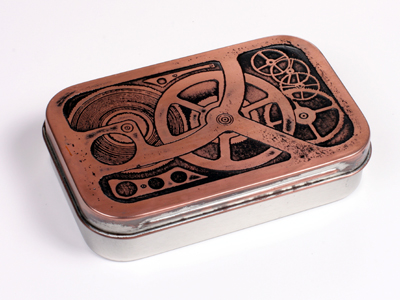 You don't have to understand steampunk, or even know what it is, to appreciate the Altoids tins designs created by tinnovator Jake von Slatt. However, understanding the gleefully imaginative subculture that is steampunk makes von Slatt's creations all the more enjoyable.

Originally, steampunk was used as a term to describe a subgenre of speculative fiction originating in the 1970s and 1980s that surrounded fantastical Victorian-era technology. It follows the tradition of the inventions that sprung from the fertile imaginations of sci-fi authors Jules Verne and H.G. Wells. As the genre's fan base widened and grew more fervent, though, life began to imitate art as cultural relics from the steampunk's alternate reality began to spring from the page and into our world.

It's not difficult to identify a work of steampunk technology. Gears and steam engines -- the machinations of the Victorian Age -- are used both to decorate and power modern-day devices. Perhaps the most widely recognized contraption is the steampunk desktop computer. Designed by Jake von Slatt, the computer is outfitted with a keyboard and monitor that function like any you'd see today, but have a decidedly 19th-century look and feel. Arguably the most prolific steampunk relic creator, von Slatt has recently found his way to the world of tinnovation -- the art of using old Altoids tins in new ways.

His reason for foraying into the world of tinnovation is simple enough: "They are very convenient palettes for etching!" says von Slatt. "They were one of the first things I thought of using this technique on" [source: von Slatt].

By marrying his love of the fantastical alternate Victorian world with old Altoids tins, von Slatt has somehow created a sub-subculture known as steampunk tinnovation. This was not without some extensive experimentation: After some tinkering and trial and error, von Slatt has come up with a process of copper plating and saltwater etching that produces a handsomely engraved Altoids tin. Fortunately for us, the creator found that the simplest method for creating a copper-plated Altoids etching also produced the best tins. Learn how to make a steampunk Altoids tin on the next page.

Occupation: IT Manager and Steampunk Artist 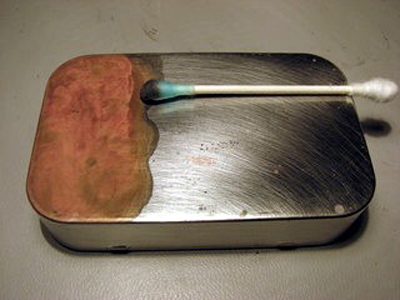 At this point, we should say that the techniques von Slatt uses can be extremely dangerous; they require the use of acids, strong chemicals and electric currents. Make sure that you understand how to apply these processes properly before attempting to replicate von Slatt's methods yourself.

To start, von Slatt uses a strong paint and epoxy remover to get the paint from all parts of the Altoids tin. He warns that epoxy remover can burn the skin [source: von Slatt]. Use heavy rubber gloves for this step to protect your hands and forearms. Once the paint is removed, von Slatt roughs up the metal surface of the Altoids tin lid with a piece of Scotch Brite scrubbing sponge and thoroughly cleans the surface with alcohol. It's now ready for copper plating.

Von Slatt found that applying copper sulfate (called blue vitriol during the Victorian Age and in steampunk parlance) created a chemical reaction that causes the stripped surface of the Altoids tin to take on a copperplate finish. Once the surface is dry, apply a little rouge (iron oxide) and use a buffing wheel to polish the tin to a high coppery shine. The Altoids tin is now copper plated and ready for etching.

The artist selects a digital image of a Victorian etching and prints it onto a piece of sticky transfer paper. He applies the transfer paper with the image to the top of the Altoids tin lid. It's about here that the process gets a bit dangerous.

Using a heavy plastic bucket, von Slatt dissolves one-quarter teaspoon of salt per quart of water. He uses a 12-volt, 1-amp DC (also labeled 12VDC, 1A or 1000uA) wall-mounted transformer with the wires separated and stripped at the end. With the power supply to the transformer shut off, von Slatt attaches the positive cable to the copper plated Altoids tin and the negative cable to another dummy Altoids tin. He immerses both tins in the saltwater solution and turns on the power supply as soon as he's clear of the water supply.

In short order, the water should begin to bubble and turn a murky greenish brown. After 10 to 20 minutes, von Slatt cuts off the power supply to the transformer, ending the electrical current to the saltwater solution. He carefully removes the Altoids tin from the solution and the cable, rinses it and removes the remnants of the transfer paper with paint remover.

After the tin is dry, he follows the previously mentioned copper plating process again, using copper sulfate, rouge and a buffing wheel to polish the tin. The result is a one-of-a-kind steampunk Altoids tin etching.