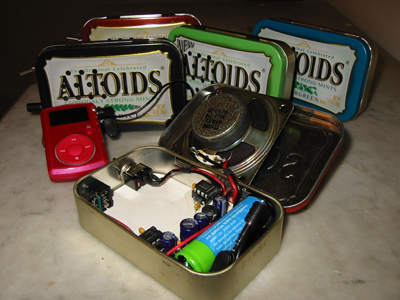 They say that necessity is the mother of invention. While this may be true in many cases, you can also make the argument that good old creativity should weigh in pretty heavily as well. After all, not every invention is necessary or vital to our existence. Just ask Matthew Poage, the creator of the Altoids speaker.

Poage is a high school math and computer science teacher and one of many "tinnovators" across the world. A tinnovator is someone who repurposes an Altoids tin in an innovative way. Altoids, the "curiously strong mint," have been sold for more than 200 years, though they weren't packaged in the tiny metal tins until 1920s [source: Edwards]. The small, rectangular metal box is now as much a part of the product as the mint inside the package. Tinnovators come in all stripes; some of them stick to the artistic side of things, fashioning miniature shadow boxes or custom pill carriers. Others get a little more use out their tinnovation, making tiny survival kits or belt buckles.

Poage has a background in production pottery and counts potter Byron Temple as his major artistic inspiration. Temple, a pottery pioneer known for his "functional" pottery designs, passed away in 2002, but not before leaving his mark on the design world. Poage's goal was to honor Temple's approach in "form, function, design and utility." In short, he wanted to make something that Temple would have been proud of, using the unusual medium of an Altoids tin. He wanted to create an "object of virtue." With the Altoids speaker, he may have done just that.

Squirt Bottle Activities for Kids
What can I do with my paper towel tube?
Ultimate Guide to Recycled Denim Crafts