How to Make a Remote Control from an Altoids Tin 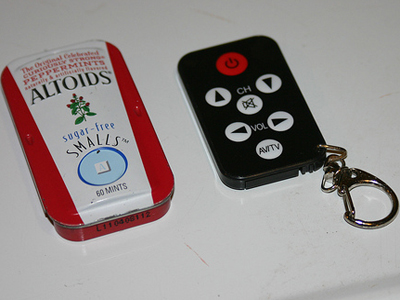 Joe Rowley considers himself open-minded, especially when it comes to Altoids tins. "I'm a high school kid free of mint tin preconceptions," he says [source: Rowley]. In other words, when Joe Rowley looks at an old Altoids tin, he doesn't see just a charming metal box that formerly housed the world-famous mints. Instead, he sees all kinds of ways that they can be refitted and reborn into entirely new things. This places Rowley firmly in the subculture of tinnovators -- people who find creative ways to use old Altoids tins. "The mints are great and the empty tins have thousands of uses," he says [source: Rowley].

Although Joe's just getting started in the world of tinnovation, he's no newcomer to creation. "I love building and tinkering in my free time and have been doing it for years," he says [source: Rowley]. He's also been acquainted with Altoids mints for some time as well, having been given them as a reward for staying quiet during long car trips with the family. One can imagine that it was merely a matter of time before Joe Rowley's love of innovation and his fondness for the mints came together into an Altoids-centered design project.

Already, Rowley has future projects lined up in his mind. We can look forward to Altoids tin flashlights, tree planting kits nestled in Altoids tins and, perhaps coolest of all, an Altoids tin roaming cellular-based Wi-Fi network. Rowley also sees a good use for the old tins themselves: He wants to send them to kids in other countries to expand the global reach of tinnovation. He says that he wants "to make the world a better place for future generations by reducing and reusing our renewable resources -- preferably through electronic projects" [source: Rowley].

In the meantime, Joe's come up with a clever use for old Altoids tins: He uses them as housing for keychain universal remote controls. Learn how to make one on the next page. 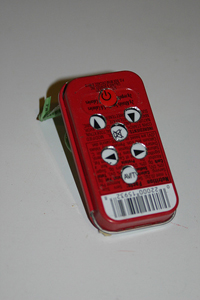 Use a piece of paper to trace the button pattern to make drilling the holes easy.
Courtesy Joe Rowley

It might seem innocuous, but this project is tailor-made for pranksters. The tiny remote control used for the project is a universal one; the Altoids tin provides a handy disguise when covertly changing the channel or volume of a nearby television. Of course, it can also be used in a much more straightforward manner, as we'll see below.

To create the Altoids tin remote control, Rowley starts with a clean, dry Altoids Smalls tin, which happens to be the perfect size for the tiny universal remotes. They usually measure around 2 inches (5 centimeters) long by 1 inch (2.5 cm) wide. Since there's space left over after the remote is inserted into the tin, Rowley cuts lengths of foam rubber to serve as filler in the tin and to hold the remote in place. Cut one piece of foam rubber that fills the lid of the Altoids Smalls tin. Put the remote in the base of the tin, with the top of the remote pressed against the top of the tin. Cut a piece of plywood to serve as a shim that will fill the void left between the bottom of the remote and the edge of the tin. Set these aside for now.

Create a template for drilling the holes in the Altoids tin's bottom that will expose the remote control's buttons by laying a sheet of paper over the buttons. Using the side of a pencil, trace the button patterns onto the paper. Lay the paper over the underside of the Altoids tin's base and drill the holes into the tin. Rowley recommends holding the tin in place using a vise and inserting a block of wood into the tin during drilling to ensure that it holds its shape [source: Rowley].

On the top edge of the Altoids tin base (where the top edge of the remote will sit), cut away a length of the tin's edge or drill two 3-millimeter (1.1 inch) holes instead. This will allow the infrared signals emitted by the remote to pass through. If you bypass this step, the infrared waves will simply bounce around inside the Altoids tin and won't affect any nearby television.

Glue the foam rubber backing to the inside lid of the Altoids tin and the plywood shim to the bottom edge of the inside of the tin base. Place the remote control into the tin base facing downward. Close the tin and you've got yourself an Altoids tin remote control. Once you expose the buttons on the bottom of the tin, you're ready to freak out friends and strangers alike as they try to figure out what's going on with the television. No one would ever suspect you.