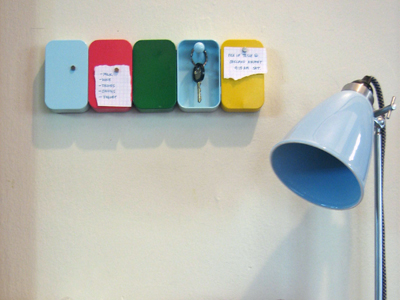 Kate Pruitt loves to makes lists and notes. To keep up with everything, she's created an Altoids tin key hook and message board.
Courtesy Kate Pruitt/Design*Sponge

Where are your keys? They've gone missing again, haven't they? Now you're late for work, for a date, for a doctor's appointment -- simply because you don't have a good place to keep your keys.

Artist and do-it-yourself design editor Kate Pruitt feels your pain. This is why she came up with her Altoids tin key hook project. Pruitt became a tinnovator -- a crafty person who creates novel uses for old Altoids mints tins -- somewhat accidentally. After being asked to create four projects per month from a single source material for the Design*Sponge blog, she happened upon a bin filled with old Altoids tins and concluded that they were too versatile to pass up. "I have always loved small things and the idea of pocket-sized inventions," Pruitt says. "Plus, the mints are tasty" [source: Pruitt].

Pruitt came up with a wide variety of projects using Altoids tins -- from a desktop Zen garden to a travel photo frame and album -- but her crowning achievement for the month she dedicated to Altoids tins projects might be her key hook.

The concept is simple enough: Pruitt took an old Altoids tin, painted it and added a key hook. Sometimes, though, a little of a good thing isn't quite sufficient. Pruitt says that she and her boyfriend are "compulsive list and note makers." To help clean up the piles of paper scraps littering her place and to prevent those lists and notes from getting as lost as her keys, Pruitt added a few Altoids tins to her key hook and created a message board to accompany it [source: Pruitt].

Together, the row of brightly colored Altoids tins provides a quick blast of color to any entryway as well as a practical way to maintain an orderly life. Learn how to make Kate Pruitt's Altoids tin key hook and message board on the next page.

Making the Altoids Tin Key Hook and Message Board 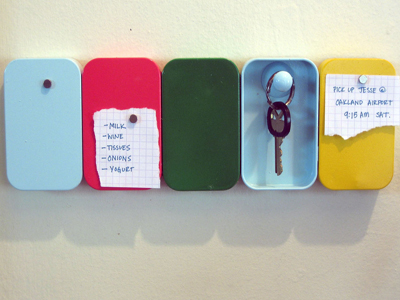 When assembling the tins into a single whole, be sure to glue one with the inside of the tin exposed to hold the key hook
Courtesy Kate Pruitt/Design*Sponge

Kate Pruitt's Altoids tin key hook and message board is surprisingly simple to create. She uses five old Altoids tins, each cleaned and dried with the lid removed, leaving only the bottoms of the tins. Since they will be lined up lengthwise, side by side, Pruitt uses pliers to flatten the flaps left over after the lids are removed as close to the tins' sides as possible. Choose two tins to serve as the end pieces of the key hook/message board. Drill a small hole in the top right corner of one tin and the top left corner of the other. The holes will provide places to mount the tins to the wall.

Now that they're ready for action, the Altoids tins are ready to be primed. Use a spray primer to coat the tins evenly inside and out. Allow the tins time to dry. (Pruitt says you can also use decorative paper and Mod Podge glue and sealer instead of paint.) Once the tins are properly primed, Pruitt uses a different color of spray paint for each Altoids tin; you should need only one coat, she says. While the tins are drying, paint a key hook with a magnetic back with the same color as the tin it will be affixed to.

After the tins and key hooks are dry, choose two to adhere together, using epoxy adhesive to glue them side by side with the backs facing outward. The flat backs of the tin bottoms will serve as the smooth surface of your message board. Start with the far left tin (the one with the hole in the upper left corner) and glue another to it so that the tins line up lengthwise. When the epoxy is dry, glue another to the second tin in the same fashion. Somewhere in the assembly, remember to glue one of the tins with the bottom facing downward, leaving the inside of the tin exposed. This is the tin that will become your key hook.

When all of the epoxy has dried, place your magnetic key hook in its tin. Now you can mount the message board and key hook assembly on the wall. With a few small magnets, you'll be able to keep up with your lists, messages and keys. If you're late again, don't blame Kate Pruitt. She's done all she can to help.