How to Make Fine Art from Altoids Tins 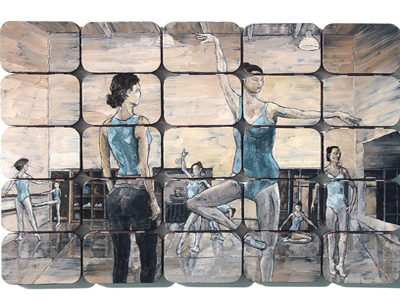 The famous Altoids mint tin has served as inspiration for many crafters and inventors that enjoy working with a small medium. There's something about this two- by three-inch (5- by 7.6-centimeter) metal box that brings out creativity in people. We've profiled some of these artists and what they've done with the tin here on HowStuffWorks.com, from belt buckles and flashlights to custom keepsake boxes and Zen gardens. Each "tinnovator" has a distinct vision of what can be done with the box.

Miami area artist David Zalben is a little different from his other tinnovating cohorts. Zalben was already established as a painter and wire artist before he was inspired by the Altoids tin. The Brooklyn born artist became interested in painting on the Altoids lid when he noticed a couple of the tins lying around his house and figured it would make for an intriguing project to paint something on the tin along with a corresponding image inside the box. He soon moved on to combine many Altoids tins together to use them as his canvas. So unlike many of the other Altoids artists, he doesn't house anything inside of the tin.

Zalben draws his creative inspiration from people and their emotions: happiness, humor and sexuality. He also tries to communicate irony and the simple details of daily life through his paintings. As a resident artist at the Artcenter/SF in Miami, Fla., Zalben is in touch with art collectors in the United States. He also has an art broker in Europe and Miami to help him sell his one-of-a-kind pieces as well as a gallery that carries his work.

His materials, like any painter, are simple -- a brush and oil paint. The only thing different is how he applies his creative vision. That's why he sees himself as an artist who happens to paint on Altoids tins, and not necessarily a tin artist. Depending on the size of the piece, one can take anywhere from days to several weeks to complete. But, as Zalben points out, it's not so much how long it takes or even what he uses as his canvas that's important to him. He only measures his progress "by the quality of the final art work."