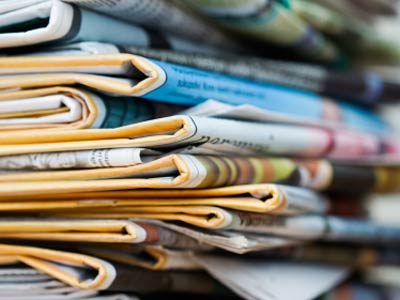 This stack of newspapers is a craft project just waiting to happen. With a few supplies, you could turn this pile into beads, place mats or logs for the fire.
©iStockphoto.com/Katie Molin

Paper accounts for one third of recycled materials in the United States [source: EPA]. We go through loads of it every day, tossing aside hundreds and hundreds of pages of newsprint alone.

Recycling is a great alternative to just trashing all that paper, but it's a bit boring -- beating it to a pulp and then washing it. Then there's still bleaching, strengthening, draining, flattening and drying, just to create some more paper [source: Grays Harbor]. Thankfully, if you want to recycle your newspapers yourself, you can skip that whole process and instead go for some fun, creative crafts.

Instead of taking that pile of newspapers to the recycling center, allow this article to inspire you. Create something new out of something old. Just as recycling newspapers saves the environment, you can save trees by transforming old newspapers into campfire logs. Not the outdoors type? Spend some time making jewelry of all sizes, shapes and colors. Preserve history by making effortless place mats with the kids. Or, get ready for the holidays or a party by making your own papier-mâché. All of these crafts take a bit of time, but you'll find your effort well spent. And all you need is your left over newspapers, a free afternoon and some crafting space.

Whether you're a crafter at heart, or just starting out, you can find some easy ways to be green -- while saving some green at the same time. To start, visit the next page to learn how to use newspaper for more than just a quick fire starter in your fireplace.

Who needs fresh cut logs? A cheap and environmentally friendly way to preserve trees, while making use of those old papers, is to make your own.

To make these super-saving logs, you'll want to gather:

Remove the colored and glossy sections of the newspaper from the regular newsprint. Stack the prints on top of one another, alternating the folded edges with the cut edges so that the pile is level. Soak the entire pile in your water for roughly five hours, until you can see the newspaper starting to break apart.

Once you remove the newspapers from the water, spread them out on a concrete surface. Push out what water you can with your hands, and then take your rubber mallet and finish the job by hammering out the rest of the water. Flip the newspaper pile over and repeat.

If you're interested in creating logs that will give off different colored flames, add the following (which you can usually find at science and teacher supply stores) to the water in which you're soaking your newspapers:

If you don't have a fireplace, don't worry -- there are plenty more crafts for your old newspapers. Read on.

You’ll want to use two paper logs to one wood log. The paper logs will ash more than wood logs because of the density of the paper, so it's a good idea to combine the two [source: Lehman].

One project that's fun for both adults and kids is creating beads out of recycled newspapers. Chances are that you'll have just about everything you need around the house.

Start by filling the large, nicer pot with water and heating it to a boil on your stovetop. While the water is heating, spend several minutes ripping several sheets of newspaper into small pieces. The smaller you make your pieces the easier it will be to create the beads in a size to your liking. Toss the newspaper pieces into a large old pot that you no longer use for cooking. The pot may be difficult to clean after this process, so an older pot is best. In fact, you may want to pick one up at a local thrift store or yard sale.

Once you've finished ripping newspaper, pour the boiling water into the pot with the pieces. Make sure it's enough water to cover the newspaper scraps, and let it sit for an hour. Once the hour is up, stir the newspaper to help it decompose and drain as much water from the paper as you can. Then add enough clear-drying glue to the mixture to hold the paper together.

Now comes the fun part. Roll a portion of the paper-glue mixture into a ball the size you'd like your beads to be, squeezing out any additional water as you go. Take a toothpick and pierce the center of each ball going through to the other side to create the hole for stringing them. Let the balls dry for a few days, rolling them two to three times a day so that the beads keep their shape [source: Sanborn].

Once all of the beads have dried, sand down any rough edges. Paint the beads with craft paint, and once the paint dries, cover the beads with a light coat of varnish to protect your art. Then start stringing!

Now that you're good at tearing newspaper, read on to learn another craft you can tear into.

You’ll want to rip the newspaper rather than cutting it with scissors because cutting the newspaper leaves behind a cleaner edge, which can leave an apparent seam. Ripping leaves a ragged edge with exposed fibers. The exposed fibers blend more easily [source: Ultimate].

Building with papier mache (also papier-mâché or paper mache) is quite possibly one of the most creative outlets for crafting with recycled newspapers. The most expensive supply you'll need is some leftover paint -- you can make everything else (even the glue!) yourself.

For papier mache, you'll want to utilize the tearing technique you learned while creating beads. Gather your recycled newspapers and rip them into strips that are approximately 1 inch (2.54 cm) wide; if you make your strips much thinner they will be difficult to work with. Ripping in this case will help the strips cling smoothly and evenly to the form you'll use. If your edges are too neat, you will get bumps in your project. Once you've ripped enough newspaper to cover your form two to three times, it's time to make the glue.

It's fine to use ready-made, clear-drying glue in this project, but many people prefer to go the cost-effective route and make their own. To do this, you'll need to mix one cup of flour into one cup of water until it forms a thin paste. This concoction gets mixed with four cups of boiling water. Stir and simmer for three minutes. The glue will thicken as it cools [source: WGBH Educational Foundation].

There are many forms that crafters like to cover with papier mache. Many use blown-up balloons; some crinkle and wad up newspaper and masking tape to create shapes that they cover with papier mache. Regardless of which method you use, you'll dip the newspaper strip into the glue and then begin covering your form. You should overlap the pieces a bit as you go to minimize holes. You can do multiple layers at once, but it will take longer to dry -- and papier mache takes days to dry to begin with.

When your papier mache is dry to the touch, you are ready to decorate your creation. If you have used a balloon, you'll want to pop the balloon with a pin. It's perfectly acceptable for the balloon to remain inside your shape; no one will see it. The paint will double as decoration and a lacquer to help preserve your masterpiece [source: Make-Stuff].

If you're interested in preservation, this next craft may help you protect an antique.

Lacquered items made of papier mache and embellished with Oriental patterns could be found throughout the East centuries before the technique made its way to France in the early 1700s. From there, the process traveled to Germany and England [source: Britannica].

The easiest way to create place mats out of your recycled newspapers is to assemble some interesting articles and head over to your local copy shop. Simply laminate the articles together, and you've designed place mats that are simple yet remarkable. You could also get the kids involved and have them choose articles or comics to create place mats to accompany their breakfasts.

For a more intricate final product, try weaving them. For each placemat, you'll need two newspaper spreads. One of the spreads should be folded along its center crease. Turn the newspaper so that its center fold is closest to you. Cut straight lines 1 inch (2.54 cm) apart from the fold to the edge of the paper farthest from you. Leave a 1-inch (2.54 cm) border around the three sides that aren't folded so your place mat has something holding it together. Cut the remaining spread widthwise into strips that measure -- you guessed it -- 1 inch (2.54 cm).

A variation on this place mat would be to cut curvy lines into the first newspaper spread. The strips used to weave should remain straight [source: Lee]. Once your woven placemats are finished, you can laminate them for protection or varnish them.

You now have plenty of options for making use of those old newspapers. For even more ideas and information, check out the links on the next page.

Another fun way to use your recycled newspaper placemats is to accessorize for a themed dinner party. With the recent inauguration of Barack Obama, you could cook one of the recipes that the First Family has enjoyed that several media outlets have featured [source: Cury]. Laminating some articles from the election or Obama's first months in office would serve as fitting place mats for a Presidential dinner party.